Read more
You are at:Home»Records»Albums»‘Lacklustre at the best of times’: A Review of Florence + The Machine’s Dance Fever
By Sam Pegg on May 12, 2022 Albums, Records
60%
60
Mixed

Dance Fever gives us the best of Florence + The Machine occasionally, but too often it struggles to find its place past being another 'High As Hope' look-a-like.

The career and legacy of Florence + The Machine is hardly something to scoff at. A band that turned into an overnight sensation with singles like ‘Kiss with a Fist’, ‘You’ve Got the Love’, and ‘Dog Days Are Over’ seemed to reach the pinnacle of their musical success in 2011 with the release of Ceremonials. The music of Florence Welch and her bandmates seemed bright and exciting, as a blend of alternative pop merged with poetic lyricism and ethereal musicality that helped establish an identity that was idiosyncratic to them.

It only feels a shame then that the identity they curated has faltered in recent years, favouring slower and “safer” music that Florence + The Machine’s original fans have never quite embraced. That’s not to say Dance Fever is bad by any means, but it reminds us of what the band are capable of and the fact they choose not to do it anymore.

Dance Fever is very much an album that tries to accumulate everything Florence + The Machine have learnt about the music industry. It’s an album described as “recorded predominately in London over the course of the pandemic in anticipation of the world’s reopening”, and that hint of anticipation comes in the messiness of tracks like ‘Free’, or the woosy composition of ‘Morning Elvis’. 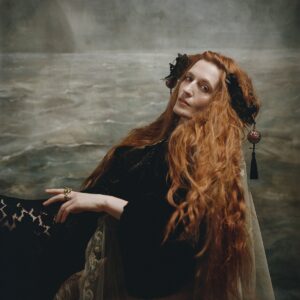 There’s a great sense of trying to look forward in Dance Fever, even if the album struggles to find an identity amongst the band’s earlier discography. ‘Free’ probably offers the most identity of any of the band’s new material, but it also comes across as dysfunctional in execution; it doesn’t reach the same heights as ‘My Love’, or personal favourites like ‘Cassandra’ and ‘Dream Girl Evil’. In fact, ‘Cassandra’ is the best example of the type of music that Dance Fever could have been, as it mixes the slow ballad-like composition of the High As Hope days with the ethereality of the Lungs and Ceremonials days. On the other hand, ‘Dream Girl Evil’ is just a great song through and through, making great use of drums, guitars and those vocal flares that belong to Welch in an unmatched way.

Sadly, for every ‘My Love’ though, there are roughly three slower songs in the vein of ‘Back In Town’, a monotonous, one-note track that’s already a skip after one listen. What this creates is a feeling of dwindling momentum, the pace picking up for one song that begs to have you dancing around the room, before pulling you back down to earth to listen to the melancholic or retrospective reflections of Florence Welch.

“There’s a great sense of trying to look forward in Dance Fever, even if the album struggles to find an identity amongst the band’s earlier discography.”

At this point, it feels like Welch cares more about the poetry of her music rather than the music itself, and this ends up leaving Dance Fever feeling lacklustre at the best of times. It’s all too neat, introspective and reflective on events and situations that don’t capture the brilliance of the band’s earlier days. They had already proven just how tight their lyric-writing was with High as Hope, and Dance Fever seems to rather emphasise what we already knew rather than take us somewhere new. 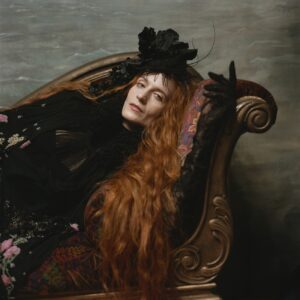 Although, not every slow song is a dud. ‘Daffodils’ leans heavily into the theatrics of music and conjures the same mysticality that ‘Seven Devils’ did for Ceremonials. At the same time, ‘King’ while not musically distinct, is an important meditation of feminity that makes its lyrics some of the best that Dance Fever has to offer. In fact, apart from one song, all of Dance Fever‘s tracks have something of merit, even the brief minute interludes that extend songs rather than exist as separate tracks like their placement would suggest. The issue is that there is not enough balance within the music – it prioritises a bunch of songs that eerily sound similar to one another rather than giving time to the tracks that develop Florence + The Machine’s sound.

Dance Fever is 0ut via Polydor / Universal Music on Friday 13th May 2022. Watch the video for ‘Free’ below: