Read more
You are at:Home»Records»Albums»Review: Wallows – Tell Me That It’s Over
By Charlie Burgess on April 13, 2022 Albums, Records
70%
70
Nostalic bedroom pop

Indie pop band Wallows are back with their second LP, Tell Me That It’s Over, and it’s an immediately recognisable sound for fans of the band. With a platinum single under their belts – ‘Are You Bored Yet?’ from their debut LP Nothing Happens – Wallows have nothing to prove with their sophomore album, which remains firmly in the genre which would be described as ‘bedroom pop’.

The LP does take on new inspirations, with a strong 80s influence in some of the leading tracks, but otherwise retains the slow and mellow pace characteristic of indie bedroom pop. The lyrics explore love, loss, and the end of a relationship, with the title lyric of ‘Tell Me That It’s Over’ recurring throughout the LP.

Standout tracks include ‘I Don’t Want to Talk’, ‘Especially You’, and the ballad-like ending track ‘Guitar Romantic Search Adventure’. ‘I Don’t Want to Talk’ disguises an exploration of a failing relationship behind a fast-paced pop track which certainly echoes Wallows’ earlier material. Similarly, ‘Especially You’, the third track on the album, has a catchy hook that has been living in my head rent-free recently while exploring overthinking and miscommunication – “I’ll read into anything / I know that’s not what you meant / I got the wrong sentiment”. 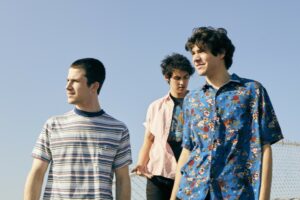 There is a clear 80s influence throughout the album, especially in the fourth track ‘At the End of the Day’. The song was written on just acoustic guitar, Braeden Lemasters told MTV, taking inspiration from Neil Young. However, as the production process took place, 80s synths and drum machines were added, giving the indie-pop song a nostalgic vibe. Wallows recruited Ariel Rechtshaid to produce the album, whose influence can definitely be identified throughout the album; ‘Permanent Price’ could be mistaken for a Vampire Weekend song.

The album is nicely sandwiched by a new element of string arrangements in the opening track ‘Hard to Believe’ and the penultimate track ‘That’s What I Get’. The penultimate track expresses a bitter resentment towards the pain of a breakup – “I’d never give up on you but you gave up on me / And that’s what I get for falling in love”. The strings fit nicely and progress into more synth and electronic sounds by the end of the song. It could have made a nice finish to the LP. It continues, though, for one more song – ‘Guitar Romantic Search Adventure’ – a four-minute ballad track that starts with just acoustic guitar and piano, building into a grand climax and finishing on the opposite sentiment to the LP’s title, “I look forward to / A little me and you / So now I hope that you / Don’t tell me that it’s over”, and finally stripping back to just the acoustic guitar and piano for the final seconds of the LP.

It’s clear that the band wanted to preserve elements of what fans love about the band’s sound while introducing some more experimental tones in tracks such as ‘At the End of the Day’ and ‘Hurts Me’. While the album, in my opinion, doesn’t quite live up to Wallows earlier successes, it definitely expands the band’s horizons and introduces some new elements to their repertoire with some standout tracks.

Tell Me That It’s Over is out now via Atlantic. Watch the video for ‘At the End of the Day’ below: