Despite not furthering his pop-punk sound, Machine Gun Kelly delivers an album full of bangers to elevate the genre into pop culture once more.

Colson Baker, aka Machine Gun Kelly, has undoubtedly taken the world by storm since ‘switching’ genres from rap to pop-punk in 2020 (though a new rap album is set for later in 2022). There is no denying that he has certainly become quite a controversial figure, mainly from Slipknot-loving metalheads on Facebook who MGK clearly does not aim his music towards. The album follows 2020’s Tickets To My Downfall, a punchy, fun album produced by blink-182 drummer Travis Barker (who returns for this album). mainstream sellout takes a darker turn, introducing more self-reflective lyrics on Baker’s life and relationship with fiancée Megan Fox.

The more self-reflective lyrics are immediately introduced on opener ‘born with horns’, with Baker comparing his life to quite literally being “the devil’s spawn”. It is undeniable that quite often MGK’s lyrics are frankly a little cringy, to which I agree. However, I don’t think this is necessarily a bad thing. Pop-punk, for me, is generally a cringy genre – and that’s what I absolutely love about it. While the 2010s saw the rise of more ‘serious’ pop-punk bands (such as Hot Mulligan, The Wonder Years and The Story So Far etc), MGK is clearly homaging the likes of blink-182 (who you cannot deny have some absolutely mortifying lyricism), Sum 41 and Bowling For Soup through his lyrics. You can’t really pinpoint this to a single point in ‘mainstream sellout’, as it appears throughout really – and I absolutely bask in it.

There are several collaborations in this album, more so than on Tickets. The first of whom being Sheffield metalcore titans Bring Me The Horizon, with lead singer Oli Sykes providing vocals in ‘maybe’. Sykes helps this track to be one of my highlights, with one of the catchiest choruses as they bellow “I’m taking the last, I’m taking the last” (try getting that out of your head once you’ve heard it!). 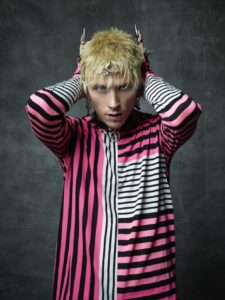 Another highlight comes in the form of the title track ‘mainstream sellout’. Preceded by a vocal skit featuring comedian Pete Davidson, MGK utilises it to directly target those on social media (naming no names, r/poppunkers…) who call him out to “leave the scene, you’re ruining it”. This theme appears across several tracks across the album, notably in a new version of the grunge-tinged ‘papercuts’, which was the first single back last August. “Y’all said that I switched genres / I saw the limit and took it farther” notes MGK in this track, revealing that he certainly isn’t going to shy away from his critics, something that had previously been avoided in Tickets (despite him having a constant backlash to his pop-punk sound since the release of i think i’m OKAY in June 2019).

Now, I think the Willow Smith-featuring single ’emo girl’ ought to be defended. It has been relentlessly mocked on social media for its knowingly-cringe lyrics and repetitive chorus. But again, I think those just make the song a stand-out. Call me out for a trash music taste all you want, but frankly MGK and Smith’s vocals on this track sound absolutely glorious, particularly alongside the thumping guitar throughout, eliciting the start of an early 2000s high school comedy film. To me, this is the ultimate throwback to the early 2000s on this album. I’m convinced that if this were a song from Bowling For Soup in 2002, it would be heralded as an absolute classic now. Despite the backlash, ’emo girl’ has amassed a significant amount of streams, so perhaps it’s just a vocal minority hating. Succeeding tracks ‘5150’ and ‘WW4’ also serve as perhaps the closest MGK comes to emulating blink-182’s ‘Enema of the State’ through their punchy choruses and lack of pop production. 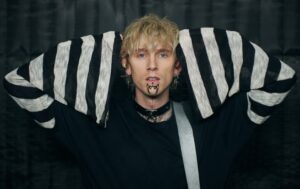 That is not to say, however, that mainstream sellout is entirely derivative; far from it. Similar to Tickets To My Downfall,  MGK seamlessly blends trap and recent pop production styles across the album which in 2020 certainly began a new style of pop-punk. MGK started an entirely new wave of pop-punk with that album (reaching the top of the charts alongside Olivia Rodrigo’s ‘good 4 u’ and 24kGoldn’s ‘Mood’), and only elevates it here. This blend is most notable in ‘drug dealer’, ‘make up sex’ and ‘fake love don’t last’, which feature pop-rappers Lil Wayne, blackbear, and iann dior respectively.

My main critique of mainstream sellout is that it isn’t that different from Tickets To My Downfall really, with the hints of darker subject matters failing to appear outside a few select tracks, instead just feeling like a bit of an afterthought. There were rumours that the album was intended to have a grungier style, but after lead single ‘papercuts’ didn’t perform as well as hoped, this was scrapped. Yet, I certainly think MGK should tackle those themes again in future releases. As it is, however, mainstream sellout is a rip-roaring, enjoyable collection of pop-punk bangers, which, whether the ‘scene’ likes it or not, firmly cements him as a major player in the genre.

mainstream sellout is available to listen to now via Bad Boy / Interscope Records. Watch the video for ’emo girl’ here: