Read more
You are at:Home»Records»Albums»A clear shift towards pop appeal: A Review of Kae Tempest’s The Line is a Curve
By Reece Beckett on April 2, 2022 Albums, Records
80%
80
Beautiful

Kae Tempest's latest album is a strong summary of their split ideas between cynicism and love, navigating contemporary life through spoken word.

Kae Tempest has proven their artistic worth time and time again over the last decade. Beginning as a spoken word poet who pushed into the typically extremely high brow genre with a refreshing urban kick (merged brilliantly with Greek mythology in their poetry collection Hold Your Own), Kae soon made a transition into music – most notably with the fascinating adaptation of their extended poem Let Them Eat Chaos which they turned into a rap record in 2016.

Kae’s follow-up, The Book of Traps and Lessons, was more tender and focused on personal experience as opposed to crafting a narrative with characters. This coincided with the release of Kae’s collection of essays On Connection, a staggeringly beautiful non-fiction book which saw Kae lay out their ideas regarding person-to-person connection and how important it is to try to bond as much as possible with the world, with art and with those around us. It is an impossibly touching read, full of passion and love for all things art – or otherwise.

And so it makes sense that Kae’s new album, The Line is a Curve, fits in with this more mature and more tender outlook towards the world. This isn’t to say that The Line is an album without the angst that pervades their earlier work – it is still very much present, but it is now counter-balanced by an undying love for and recognition of the beauty that contrasts it, as can be seen in the direct juxtaposition between this album’s opening track ‘Priority Boredom’ and its closer, ‘Grace’.

The instrumentals maintain the sound of Kae’s other work, but with a clear shift towards a sound with more pop appeal. There’s an interesting double life that the album lives within – hopping back and forth from hip-hop and poetry, from Kae’s more underground edge and a newer mainstream appeal (captured most effectively on the lead single ‘More Pressure’) and from cynical tracks on modern technology or politics to beautiful stories about people.

‘No Prizes’, featuring Lianne La Havas, is a good example of this. A laid back instrumental of primarily piano and 808s lets the focus go almost entirely to Kae’s poetry,  which sees each verse talk about a specific person whilst also speaking to ‘government cover-ups’ and mental health in honest detail, punctuated by La Havas’ vocally gentle but emotionally powerful hook. 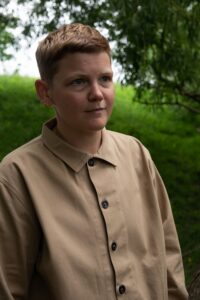 The use of features across the record is refreshing in two ways, too. Kae has never used featured artists in their music before, and so the first mentions of there being features on this record was met with some initial rejection, but the final songs speak for themselves. As already stated, La Havas makes a great contribution to ‘No Prizes’, but there is also the beautiful spoken word poem by Grian Chatten on ‘I Saw the Light’ and the song-stealing verses by Confucius MC and BROCKHAMPTON member Kevin Abstract on ‘Smoking’ and ‘More Pressure’ respectively. These features are sparingly used, and clearly curated with care by Kae as each one enhances the track that they’re on immensely.

Whilst some of the instrumentals would be helped by some extra variation, The Line is a Curve is a strong, emotional album that may be divisive but will have some die-hard fans. It’s tailored to a specific sound with its spoken word poetry link and electronic instrumentals, but those who link to those styles will most likely adore this album.

The Line is a Curve releases on Friday, 8th April 2022. Listen to the album’s lead single (and perhaps its best track!) ‘More Pressure’, featuring Kevin Abstract, below: