Read more
You are at:Home»Records»Albums»‘Bursting with bravely emotive tracks’: A Preview of Sea Girls’ Homesick
By Ellie Griffiths on March 18, 2022 Albums, Records

Having listened to Sea Girls‘ previous album Open Up Your Head on repeat throughout the duration of the pandemic, I was delighted to have been given the opportunity to preview the up-and-coming band’s newest album Homesick, featuring thirteen new songs, two of which belong to the deluxe edition.

Lead singer Henry Camamile – like many of us – found himself returning to his childhood home at the start of lockdown. Surrounded by the time and space to reflect on his past experiences, Camamile used the opportunity to craft the genius of Homesick, which explores themes such as his childhood and teenage years, mental health, and past relationships. This brilliantly raw and honest album offers cathartic and cinematic lyricism from start to finish, reframing the monotonous and painfully intense narrative of life into one of gratitude and celebration – a reflection of Camamile’s growth in mentality and strength.

Having been previously released as the album’s first single, ‘Hometown’ helps bring listeners into the allure and excitement, successfully setting the anticipatory mood. Starting with a track as bold and enlightening as this one is ultimately the perfect introduction for such an album. Exacerbating a sentimental feel for rock, the initial track frames a sense of nostalgia and longing, which only grows stronger as the album progresses.

My particular favourites to follow were: ‘Lucky’; ‘Cute Guys’; ‘Friends’ and ‘Lonely’. 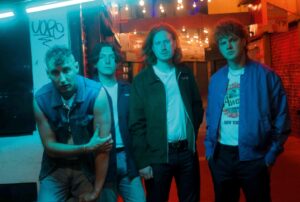 The first – ‘Lucky’ – initiates conversation into the ways things could have been different, if a different pathway was taken. The lyric “I’m gonna show two fingers to the boy I was; I kid myself for how sad I got, but I’m here to stay for these blue skies” bravely alludes to a former depressive state of mind, and the courage and strength it took for the lead singer to change his thought-process and alternatively express gratitude for all the band has achieved and are yet to achieve. This is excellently accomplished through a subdued sense of rock, which builds in intensity, echoing its narrative outright.

‘Cute Guys’ is one of the more soft and acoustic additions of the album, paired with a softer melody and higher pitch. This presentation implements vulnerable lyricism surrounding the anxieties of the lead singer, heightening with an unpredictable change in tone, which brings the track into an angry escalation of rock – accentuating the sudden change in mind that anxiety often brings those who suffer.

‘Friends’ beautifully pays a homage to friendship, and expresses the importance of time as a valuable commodity, which should not be wasted on negative thinking and choosing to sit alone in a depressed state of mind. The melody uplifted my mood effortlessly, and lyricism like “every second you’re not wasting is one you’ll never get back” reinstates a sense of urgency to live life with the glass half full, rather than half empty – a mantra I can get behind.

‘Lonely’ – also previously released as a single – I feel expresses the sadness felt by Camamile for lacking the time to explore and maintain  relationships in the past, due to working so intensely within the band. Life and work getting in the way of play and pleasure is something I think most of us can relate to, which is what makes this song so engaging.

The only criticism of Homesick is that the songs seem to increasingly blur when listening all the way through. This makes consuming the contents in it’s intended form problematic.

However, the album is bursting with bravely emotive tracks, which helps to bring the album into the addictive and alluring light it deserves to be seen within. The whole album oozes with a down-to-earth maturity and a toneful vibrancy, which I truly hope will uplift their works onto a more global stage. Having signed to Polydor Records in 2019 – also responsible for the likes of Sam Fender and Lana Del Rey – the future of the band is certainly in safe hands.

Sea Girls‘ new album is out Friday 25th March, with their national tour commencing this November. The band is set to perform at Southampton’s O2 Guildhall on Wednesday 23rd – tickets are available for purchase here.