Read more
You are at:Home»Records»Albums»Generation-defining Rock: A Review of Black Country, New Road’s Ants From Up There
By Reece Beckett on February 7, 2022 Albums, Records
90%
90
Mesmerising

With the two singles used to tease this record, Black Country, New Road made it clear that their second album Ants from Up There was going to be surprisingly different in sound when compared to their debut, For The First Time, which released 364 days before this one, on the 5th of March 2021.

Thankfully, this transition in sound is a welcome switch in the style of the band, who started their musical career by linking more with the recent U.K. post-punk buzz alongside bands like Black Midi and Squid and are now toying with a style more reminiscent of all time Rock greats. ‘Chaos Space Marine’ evokes Bowie with its roving Jazz-Rock, out of nowhere riffs and luxurious, spacy sound, whilst ‘The Place Where He Inserted The Blade’ moves more towards folklore in its lyricism and leans to prog-rock classics in its absolutely brilliant instrumental, which builds perfectly and becomes blisteringly emotional. 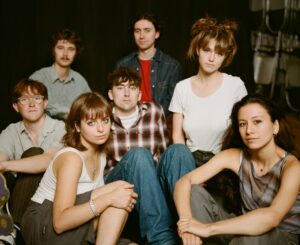 The vocals of Isaac Wood once again give a great contrast to the instrumentals, making it a great shame that Wood has had to now depart from the group to work on his mental health (it is worth noting, though, that there are no better reasons to stop creating than to look after yourself). Whilst the majority of the instrumentals on For the First Time would embrace the musical chaos that logically comes from merging punk, jazz and modern rock elements, Ants From Up There sees that chaos fine tuned and turned to shockingly precise and on point musicianship.

One only needs to listen to the instrumental introduction to ‘Snow Globes‘ to see the proof of this almost magical control over a range of instruments. The drums are unreal – gentle, but probing – the guitar playing is measured and minimal, and once again Wood’s vocals have a distinct emotion and authenticity to them. His voice doesn’t feel traditionally trained, but it lends his vocals a memorable realism, even as in this specific track the drums and the saxophone very slowly push his screams to the background (in a way reminiscent of Bon Iver‘s ‘The Wolves’, another beautiful and unique rock track).

It is incredibly impressive just how well the group are able to take a wide range of sounds and influences and make such a coherent record out of them, even if in doing so it does lose a little of that wonderfully fresh chaos that their debut had. This is a seriously good record, one that will probably be close to the top of many year-end lists of the best records as there is something in here for most music fans to latch on to – it is ambitious, gorgeous, emotional and accessible.

Whilst the future of Black Country, New Road is uncertain for now with Wood leaving, their first two records have proven their immense talent, and one can only hope that the group can find a way to continue at such a staggeringly high level of quality. This duo of albums have given the 2020s some phenomenal rock that feels genuinely generation-defining.

Ants From Up There is now available on streaming platforms, CD, cassette and vinyl via NinjaTune. Listen to the album on Spotify below.