An Evening with Silk Sonic is a vintage time capsule of 60s and 70s soul, combined with the 21st Century sensibilities of RnB production that culminates in an exceptional modern album.

Silk Sonic is a project over 4 years in the making for RnB singer Bruno Mars and rapper Anderson .Paak. While initial recording began during Mars’ 24k Magic tour in 2017, it took a pandemic for both artists to get the empty schedule needed to realise their collaboration in full. The resulting record feels like a natural blend of both artists’ musical styles, with an overarching retro aesthetic cleanly gluing everything together.

The album opens with an introduction from former Parliament-Funkadelic member Bootsy Collins, before jumping straight into the album’s lead single ‘Leave the Door Open’ that was released back in March 2021. This opening track establishes the tone of the album with its silky string arrangements, gentle comping piano and classic Motown-influenced percussion layers. It is the perfect song to open the album with, and is indulgent in demonstrating the rich harmonic and textural palette that the duo use throughout the album.

Yet, with all its stylistic nods to a musical culture of yesteryear, at its core it is still unmistakingly a Bruno Mars song. The same can be said for the tracks ‘Fly As Me’, featuring creative verses from .Paak, and ‘Smoking Out the Window’ that ooze the Bruno Mars personality established in 24k Magic.  Clearly, .paak and Mars are not merely retreading old ground or allowing themselves to fall into cliché when designing their new 60s-style sound. 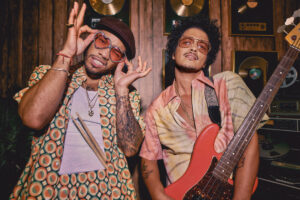 ‘After Last Night’ is another highlight, hosting a Thundercat guest feature, and has a strong funk influence alongside the track ‘777’, which prominently features a Tower of Power-style horn line. In fact, none of the tracks on the album explicitly feel like filler; despite mostly using the same instrumentation and style throughout the album, each track is able to keep its own distinct identity.

There’s ultimately not much to dislike here, just as long as you like your classic soul. Naturally, Silk Sonic sounds completely unlike anything in the charts right now, which offers a much needed injection of inspiration that may inspire further retro revivals, just like how artists like The Weeknd and Dua Lipa brought back 80s synthwave into the mainstream in 2020. The length of the album is slightly disappointing, however – at just over half an hour long, An Evening With Silk Sonic ends quite abruptly.

Despite this, I doubt this will be the end of the Silk Sonic project just yet – an eventual tour is looking likely, and I am hopeful for another album in this style from the duo.

An Evening With Silk Sonic is out now via Aftermath Entertainment / Atlantic Recording Corporation. You can listen to the lead single ‘Leave the Door Open’ here: