JPEGMAFIA's sound continues to grow outwards with his latest outing.

JPEGMAFIA has been enjoying a life of stardom and chaos for some time now. He made a gradual impact on the internet that started with experimental hip-hop released under the name Devon Hendryx, then grew out into cloud-rap reverb covers of Carly Rae Jepsen’s pop tune ‘Call Me Maybe’ (yes, really!) and finally bubbled over to the hiphop mainstream with his masterful LP VETERAN (2018), an album that remains one of the best experimental hip-hop albums of all time.

It seems like the easiest way to start to understand a rapper like JPEGMAFIA is to look directly as his lyricism. He has always been a political rapper, and one who speaks of (primarily political) violence and anarchy; so it was no surprise to hear the brilliant line ‘I’m a young Frank Zappa, y’all Sarah Palin’, praising himself as a musical revolutionary and dissing his listeners by comparing them to the Republican politician and celebrity.

The extremely internet-literate rapper seems to have been living it up. His Instagram gives insights to a lifestyle fuelled by artistic passion and dedication to sound, and his extreme productivity is evident through the swift shifts in his work. Gone are the blistering basslines of tracks from VETERAN like ‘Baby I’m Bleeding’ (which samples Zack Snyder’s Batman Vs Superman: Dawn of Justice in such a way that I’m still amazed each and every time I hear the song!); the extremely violent lyrics are mostly absent and switched out for political samples primarily for a generally lighter, happier sound. 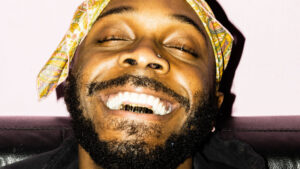 The opening track ‘TRUST!’, in particular, is beautiful – over a bubbly beat, Peggy raps about feeling beautiful and beyond many of the struggles that seem to have inspired the pure aggression of VETERAN. The sound is no longer full of 808s that want to burst your eardrums; they’re much gentler and more tender for the most part.

The focus has to go to the instrumentals throughout the record which beautifully combine absolute chaos and shockingly catchy harmonies, something that has made JPEGMAFIA stand out for his entire musical career. He can produce his tracks so brilliantly that he seems to be able to include beat switches, extremely obscure samples, wildly unique instruments and his trademark intense approach to rapping with little visible effort. The best track to listen to as an example of this would have to be the incredible ‘HAZARD DUTY PAY!’ Which takes a gorgeous soul sample, muffles it slightly, adds stunning synths and drums, and is completed by the typically manic rapping of JPEGMAFIA – often layered with ad-libs and multiple takes. It’s glorious.

Considering the consistently high energy throughout the record, it is a pleasant surprise to be able to say that it doesn’t seem to lag or run out of steam at any point. Peggy continues to sing, rap and ad-lib his presence brilliantly and with intense passion, but as said previously, the focus tends to go to the craziness of his instrumentals which make him one of the most interesting producers currently working in hip-hop. He makes some of the most unique beats that balance the discordant and the harmonious, as comes through on tracks like ‘TIRED, NERVOUS & BROKE!’. It’s a great experimental hip-hop record that remains accessible enough thanks to its excellent rhythm.

In a bold move, JPEGMAFIA posted the Offline version of LP! to YouTube in full. Listen below: