Blue Banisters has left me in a dazed trance over it’s utter beauty. I’ve loved Lana Del Rey since ‘Video Games’, so it pains me to say that I felt Chemtrails Over The Country Club signified an artist who’d missed their prime, and I was nervous about hearing Blue Banisters – but boy, was I wrong! Del Rey doesn’t hold back with honest lyrics and emotional vocals, while accompanied by soothing melodies and a variety of interesting instrumentals.

Earlier this year Del Rey released four songs from the album: the title track ‘Blue Banisters’, ‘Wildflower Wildfire’, ‘Textbook’ and ‘Arcadia’. These tracks left us anticipating the full LP, and gave us a good picture of how it could turn out. Like ‘Blue Banisters’ and ‘Arcadia’, there are many catchy stand-out songs; however, there are also songs that get better after a few listens such as ‘Textbook’, and there are some slower (dare I say boring?) tracks similar to ‘Wildflower Wildfire’. 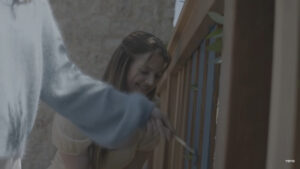 As the first four tracks of the album had already been circulated this year, I started my own personal listening party with the fifth track, ‘Black Bathing Suit’, which was the perfect introduction to the album. Del Rey has always been subjected to criticism throughout her career, but this criticism has ramped up during the pandemic, where the singer has been accused of cultural appropriation, glamorizing abuse, and wearing *THAT* mask at her book signing. ‘Black Bathing Suit’ seems like a response to the critics – Del Rey sings “you said I was bad / let me show you what bad girls do” and “you don’t know me any better than they do”.

‘Beautiful’ takes a similar approach, snapping back at critics that have simply labelled her as sad. She sings “Let me show you how sadness can turn into happiness / I can turn blue into something beautiful”. Throughout her ever changing sound, Del Rey has always been a strong songwriter, often cast aside for her ‘depressing’ sound, but Blue Banisters not only displays the depth of her writing skills, but also the beauty we can find in sorrowful art – she even questions “What if someone had asked Picasso not to be sad?”.

“Blue Banisters not only displays the depth of [Del Rey’s] writing skills, but also the beauty we can find in sorrowful art”

Another emotional track on the album is ‘Dealer’, featuring indie legend Miles Kane. ‘Dealer’ shows some incredible vocals from Del Rey, as she cries “I don’t wanna live / I don’t wanna give you nothing”, a line which I would do anything to scream this with her at a live show – although obviously not as beautifully. Del Rey’s vocals on this album are her best yet! It seems that she is no longer boxed in by her previous Hollywood-glamour aesthetic where she would sing in a pouty, often child-like voice inspired by the novel Lolita. This album feels more mature and authentic. 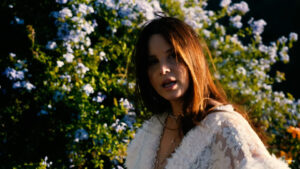 Although Del Rey is seemingly evolving for the better, we do get a flashback to her earlier eras with the song ‘Cherry Blossom’, which has featured in her arsenal of unreleased songs for years. This has always been one of my favourites for the pureness of the lyrics, which suits the album perfectfully. To the tune of a sweetly soft piano, Del Rey sings “what you don’t tell know one you can tell me”, wrapping us in what feels like a warm vocal hug; athough referring to herself as ‘mommy’ does feel a bit gross.

Similarly, the closing track ‘Sweet Carolina’, seemingly dedicated to her sister and co-writer Chuck, lovingly reassures the listener that they can dance in the light while listening to the song when things go wrong. Yet again, she undermines this beautiful message with some almost comical lyrics, singing “You name your babe Lilac Heaven after your iphone 11/ ‘Crypto forever’ screams your stupid boyfriend/ Fuck you, Kevin”.

Despite the occasional strange lyricism and mundane songs, Blue Banisters is a triumphant display of poetic songwriting, emotional vocals, and overall beauty. The album takes us on a journey from the political angst Del Rey feels at the world, to closing in onto the safe haven she finds in her friends and family. Lana Del Rey is full of so much love for her circle, and I’m so in love with her! Blue Banisters is nothing short of beautiful.

Blue Banisters is out now via Polydor and Interscope Records. Listen to the lead single, ‘Blue Banisters’, here: