Fall Out Boy: The game-changers who don't give a damn about your pop-punk preconceptions.

What’s one thing that most rock bands have in common nowadays? Well, simply enough, they just don’t seem to sound a whole lot like rock bands. Pop-punk mavericks All Time Low’s latest effort came in the form of Last Young Renegade, an album so palpably chart-friendly you could practically hear the punk, well – pop. After four years out of action, Paramore’s After Laughter felt more like Hayley Williams pulling a Gwen Stefani solo move whilst keeping the moniker of the group. Even homegrown heroes You Me At Six have shimmied in on the deal, adding a slew of Royal Blood-esque, atmospheric rock grit to their arsenal with last year’s Night People. Could it be that the glory days of pop-punk are over, the Dirty Works, Brand New Eyes’, and, even, Infinity on Highs nudged aside for the more accessible ‘Good Times,’ ‘Hard Times’ and ‘Fourth of July’s? Perhaps so, but if there’s one thing acclaimed rock band Fall Out Boy have yet to do, is prove themselves as anything but the ones to take the leap.

It comes as no surprise, then, that M A N I A, the band’s seventh studio album, leaps even further. The payoff is bigger too, with songs like ‘Wilson (Expensive Mistakes)’ and ‘The Last of the Real Ones’ being some of the best of FOB’s post-hiatus output so far. Released three years after American Beauty/American Psycho – which, just to put in perspective, is almost the longest the group have gone without a studio release, second only to the hiatus itself – the difference between the two is the biggest jump in time, sound, and genre the group have ever taken. Listen to Take This To Your Grave (2003) alongside Save Rock and Roll (2013) and, sure, the two have virtually nothing in common, but at least every album in between shows something resembling logical progression. Not only does M A N I A abandon the familiarity and jarring rock/pop fusion of American Beauty/American Psycho, it abandons even more of what we can feasibly label as rock music. 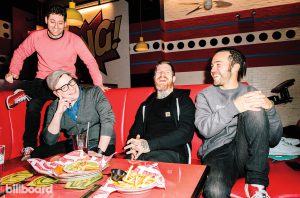 So it ain’t rock, but it ain’t bad either. In fact, a mere 10 songs later, M A N I A comes out the other side as pretty bloody good. Critics abound and attack in droves, carrying snide accusations of desertion and denouncement in their wake as they try to shout louder than ‘Wilson’s’ powerhouse refrain: ‘I’ll stop wearing black when they make a darker colour.’ After seventeen years and seven albums of genre-bashing, brand-defying, almighty musical fluidity, you’d think it would simply be nothing more than common sense to figure the next FOB album won’t be a rehash of the last.

M A N I A does, however, err a little on the side of the group’s third effort, Infinity on High, if just because it too defies the pop-punk and emo genres within the very four corners of its CD case. After all, frontman Patrick Stump’s voice was always too big to fit into a genre where vocal whininess was part of the job description. EDM leaden tracks like ‘Young and Menace’ (otherwise known as ‘Sugar, We’re Going Down Into a Bass Drop’) sit close to relatively mellow tracks like ‘Heaven’s Gate,’ a slow, soulful track that spirals into R&B and doo-wop. ‘One look from you, and I’m on that faded love,’ Stump’s voice melts delightfully through the first verse and into a falsetto-leaden chorus, matching its spiritual imagery with the song’s predecessor, ‘Church.’ The song’s refrain, ‘if you were church, I’d get on my knees’ (which probably isn’t as naughty as some fans may have you believe), lies in a similar vein to the Believers Never Die B-side ‘”From Now On We Are Enemies,”’ which rattles out the line ‘I’m just the man on the balcony, singing “Nobody will ever remember me”/ Rejoice, rejoice and fall to your knees,’ and spirals into a slew of fitting gospel harmonies. It shouldn’t work. In fact, theoretically, it should be packing up its bags, calling it a day, and having a good long think about what it’s just tried to do. But goddammit – it all just fits.

Songs like ‘Wilson’ and ‘Stay Frosty Royal Milk Tea’ might be the album’s only songs with enough venom behind their drum reps and guitar riffs to resemble anything akin to the band’s wide-spanning discography, even if the former has the pretence of a cheerful singalong hiding FOB’s typical affinity for lyrical melodrama. The latter has enough of a wallop behind it to serve as a concert opener in years to come, à la Save Rock and Roll’s ‘The Phoenix,’ and boasts more of bassist and lead lyricist Pete Wentz’s decision to shimmy in a sliver of French into the lyrics (2013’s ‘Irresistible’ was the first), and more of Stump’s attempt to pronounce it (and don’t worry – in this totally non-french speaking writer’s opinion, he does pretty swell).

In fact, any mania in M A N I A is strictly limited to just a handful of its songs, largely those released as singles in the last year (including ‘Young and Menace,’ ‘The Last of the Real Ones,’ ‘HOLD ME TIGHT OR DON’T’). Wentz describes ‘HOLD ME TIGHT OR DON’T’ as the musical form of sending a text when you’ve accidentally leant on your phone keypad, whilst ‘The Last of the Real Ones,’ he explains, follows “that kind of love you feel for someone because of their glitches, not in spite of them, where you feel the vacuum of them everywhere and your heart just feels like TNT, quicksand, and oblivion all at once.” As always, FOB are no strangers to the murky world of love, sex and relationships (the grand majority of From Under the Cork Tree is about that very phenomena, a game-changer for the 2000s rock scene), but M A N I A marks the first of the group’s efforts to explicitly deal with the topic in a positive – if somewhat hesitant – light. ‘The Last of the Real Ones’ also stands as one of the album’s best, the frantic piano hook, slew of celestial imagery and trademark FOB confessional lyrics (‘you’re the last of a dying breed/write our names in the wet concrete/ I wonder if your therapist knows everything about me’) standing out from the rest of the album’s experimental undertones and harking back to the band’s Folie à Deux days. 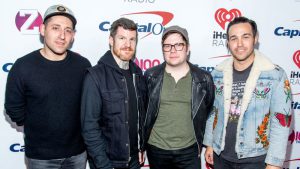 Not for the first time, Fall Out Boy have done more than just speckle a couple pop-culture references into the lyrics of an album, they’ve doused the whole thing and worn them like war-paint. ‘Bishops Knife Trick’ likely refers to a scene in James Camerons Aliens and a knife game that definitely shouldn’t be played at home (but also made the rounds a couple years ago – and a few injuries alongside it). The track closes the album, ending the record on a more melancholy and reflexive note. ‘Wilson (Expensive Mistakes)’ is at least half named after Tom Hank’s beloved volleyball in Castaway, and borrows its brash tag-line straight from the mouth of Wednesday Addams. The song’s chorus also borrows a line from Wes Anderson’s Moonrise Kingdom – “I hope the roof flies off and we get blown out into space.” Supposedly, the line “I’m about to go Tonya Harding on the whole world’s knee” (from ‘Stay Frosty’) was inspired by the 2017 movie trailers. Even the album’s lead single ‘Young and Menace’ has a painstakingly obvious reference to Britney Spears that had the world delightfully confused upon its release last April. “That’s just how Pete talks,” Stump jokes. “If you ask Pete how his day was, you’re going to get a quote – that’s just how he is. It’s so funny because it’s so earnest.”

Many may leave disappointed – and, I presume, already have –  after finding nothing in the vein of ‘Saturday,’ or ‘Dead on Arrival’ on M A N I A’s eclectic tracklisting. Gone are the days of long, sardonic and sarcastic titles (‘I’m Like A Lawyer With The Way I’m Always Trying To Get You Off (Me & You)’, ‘Champagne For My Real Friends, Real Pain for my Sham Friends,’ and ‘I Slept With Someone In Fall Out Boy and All I Got Was This Stupid Song Written About Me’ are a few personal favourites) that the group haven’t used in years but are still, for some reason, often furiously held to. There’s little to be labelled as pop-punk, emo, or, for that matter, altogether rock, but, then again, they haven’t been loyal to any genre since 2005’s angst-driven From Under the Cork Tree. In fact Fall Out Boy might be one of the most unashamedly disloyal compliers of genre out there. There’s a distinct sense of hollowness filtering through ‘Sunshine Riptide’ and ‘Bishop’s Knife Trick,’ but the record’s alternate eight offerings has enough of the same indignant passion typical of the Chicago-born boys behind it to drive M A N I A as one of Fall Out Boy’s best.

M A N I A is out now via Island Records