Read more
You are at:Home»Records»Features»The Battle for Christmas Number One: Does It Matter Anymore?
By Oliver Picken on December 22, 2021 Features, Records

Described by the Official Charts Company as the ‘ultimate prize’ in the music industry, the battle for the UK Christmas Number One has remained a staple of the festive season since the chart’s inception in 1952. With the Christmas period naturally seeing an increase in music sales, it is not too uncommon for big-name artists to start pumping out new material conveniently just before the holiday period.

However, as the music industry continues to evolve in the era of streaming and with social media platforms like TikTok driving listening trends, is the Christmas Number One a true reflection of the current musical culture of the year? By taking a look at the history of the Official Singles Chart and at recent trends in the consumption of music, it could be argued that the battle for the Christmas Number One has in fact never been more relevant and offers a unique insight into how the music industry is reforming into the future. 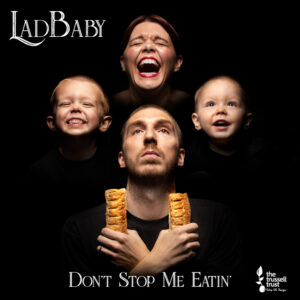 LadBaby secured their third Christmas Number One in a row with ‘Don’t Stop Me Eatin’. Photo via LadBaby.

In the wake of the drawn-out death of the TV talent show and with it the yearly production of short shelf-life X Factor winners, a new generation of novelty acts has emerged from the shadows – most notably the recent success of internet personality LadBaby and his sausage roll-themed charity singles.

While some may see the encroachment of a social media influencer into the field of pop as a sign of the irrelevancy or ‘dumbing down’ of the Charts, a look back at past Christmas chart-toppers reveals an eclectic mix of acts that can hardly be described as a ‘Musician’s Hall of Fame’.

In 2000, the virtuosic tenor performing under the name ‘Bob the Builder’ graced the chart, while Take That were denied the Number One spot in 1993 by the unsung musical prodigy Mr Blobby. Recent years have also seen social media campaigns forcing unexpected songs into the chart, with the most notable example being Rage Against the Machine’s ‘Killing in the Name’ which became the Christmas Number One in 2009. A less successful campaign to oust the X Factor winner the following year promoted John Cage’s 1953 composition of four and a half minutes of pure silence. Sausage roll anyone? 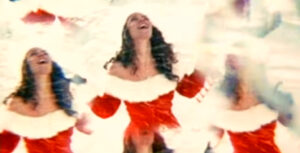 ‘All I Want for Christmas Is You’ is currently the best-selling Christmas single by a female artist. Photo via Youtube / Mariah Carey.

While streaming figures have been included in the total sales of a single since 2014, a physical or digital sale is still worth many times more than the streaming conversion. When examining streaming figures in isolation, the established Christmas hits by the likes of Mariah Carey and Wham dominate completely, with all of the Top 10 spots in 2020 taken by Christmas songs.

This figure would appear to better reflect consumer listening around the Christmas period by taking into account the volume of individual listens and not just initial sales. However, this appears to be a very recent trend – Ed Sheeran’s Number One ‘Perfect’ dominated both streaming and traditional sales back in 2017, with only a fine sprinkling of festive hits in the Top 10 of that year.

Amongst the many record labels racing to produce the best selling song of the year, recent trends have shown that Christmas is the perfect time of the year for the release of charity singles, which may for many consumers constitute their only purchase of music that year. For this year’s chart, however, tallying the streaming figures may be more reliable than just accepting the domination of LadBaby. After all, these novelty songs never appear in the charts when just streaming figures are considered, as unsurprisingly very few people want to willingly listen to a song about sausage rolls for the third year running.