Read more
You are at:Home»Records»Features»Artist in Focus: The Killers
By Sam Law on October 31, 2017 Features, Records

The Killers are the first band I truly fell in love with. Before discovering ‘Human’, and ‘Spaceman’, and ‘Mr Brightside’, and all those other classic mid-00s electro-indie-pop mega-hits, I’d simply appreciated whatever happened to be top of the charts on any given week. But poring over that Las Vegas band’s discography and blasting each and every track on repeat for weeks on end completely reshaped the way I approached music, and nearly a decade on from that experience I’d argue it’s totally fair to say that The Killers also completely reshaped the alternative and indie music landscape.

Formed seemingly under the sheer willpower of frontman Brandon Flowers, The Killers made a splash almost immediately. After leaving Las Vegas synthpop trio Blush Response in 2001 (a stint whose influence can still be heard in the keyboard-heavy Hot Fuss, Sam’s Town and Day & Age), Flowers started hunting for like-minded musicians throughout the Vegas rock scene, and within a year the core quartet of Flowers, guitarist Dave Keuning, bassist Mark Stoermer and drummer Ronnie Vannucci Jr. was formed. 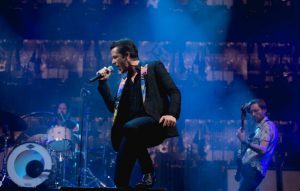 Those early months were a flurry of spontaneity, creativity and sheer excitement that’s palpable in the music the band wrote – eclectic singles ‘Smile Like You Mean It’ and ‘Somebody Told Me’ were written in Vannucci’s garage and positively ooze upbeat enthusiasm, whilst a demo of Jesters favourite ‘Mr Brightside’ was recorded before even Stoermer or Vannucci had joined the group. It really is hard to understate how prolific those early months were for the fledgling glam rock group: The Killers had “finished [2004’s Hot Fuss] pretty much up” come the tail end of 2002 according to Keuning, and by early 2003 the band were wowing audiences so impressively that L.A. music scouts began dropping by in Vegas to watch The Killers perform, even if they didn’t have gigs booked. By summer, they had secured British and American record deals, and a top 10 single in both countries in the slick, enigmatic re-recording of ‘Mr Brightside’. From there, the rest, as they say, is history: with five consecutive UK Number 1 albums in Hot Fuss, Sam’s Town, Day & Age, Battle Born and Wonderful Wonderful, and having headlined such festivals as Glastonbury, Lollapalooza and Coachella, The Killers are undeniably one of the most successful and important rock bands of the last 15 years.

It’s not hard to see how The Killers have become such legends in their field. Their music is perfectly layered, with each guitar chord or rumbling bassline hitting just the right spot, and I’m still discovering subtle flares of sound in the background of songs that I’ve been listening to for nearly a decade. But more than that, The Killers are masters at evoking mood with music – compare the beautifully intimate and melancholy ‘Goodnight, Travel Well’ to the emphatically defiant ‘All These Things That I’ve Done’ and unapologetically frantic ‘Run For Cover’. It all makes for a fantastic listening experience as each album really makes you feel something – whether joy or despondency – whilst leaving much to be gleaned from the music on each replay.

Of course, it helps that The Killers have a real talent for crafting absolute anthems, (‘Spaceman’, ‘When You Were Young’, ‘The Man’, ‘Mr Brightside’; I could go on). Having such a backlog of sure-fire festival favourites is an obvious advantage for a band who spent six years on tour following the release of their debut album, but the abundance of anthems means you never have to look far for something to belt out at the top of your voice with your mates, whether whilst the night is warming up, at peak time in the nightclub, or when enjoying a greasy kebab on the night bus home. 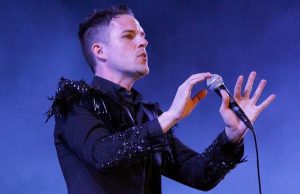 Then there’s The Killers’ mightily impressive stage presence. As someone lucky enough to have seen the band live on a couple of occasions, I can attest that they are every bit as brilliant and bewildering at the head of a festival slot as they are through the crackle of vinyl. Flowers’ vocals really have a power to them that draw you in, whilst the eccentricity and sheer musical talent that make The Killers such a joy to listen to on your phone is matched – if not bettered – by the rest of the band’s performances, stage management, lighting, costuming and makeup. What I’m saying is: if you get a chance to see The Killers live, take it! Because it’s exactly such performance power that made The Killers stand out in the first place. In an era when The Strokes, Oasis and U2 were ruling the charts, the emergence of a group of mascara-wearing, keyboard-playing glam rockers set The Killers apart and sent them straight to the top. As Stoermer put it, “No other band had keyboards,” and nothing made the band stand out nor more perfectly represented their departure from traditional indie rock than that central instrument that coloured their performances.

Just a little footnote here, because I’d be remiss if I didn’t mention the band’s philanthropic work, supporting Product Red in the fight against AIDS, tuberculosis and malaria: every year since 2006, they have released a new Christmas-themed single and video, culminating in 2016’s compilation album Don’t Waste Your Wishes and raising over $1m so far for the charity. Go check that album out. It’s magical!

So after four studio albums, three compilation albums, a Christmas EP and a five-year wait since their last original LP, The Killers are back to the top of the UK charts with Wonderful Wonderful. Even after just a couple listens, it’s easy to see why it has proven so popular. The key Killers ingredients are there – delightfully layered instrumentation, huge anthems (‘The Man’, ‘Run For Cover‘) and just that hint of synthpop from Flowers’ Blush Response days – but there’s also enough different to make it stand out, both from The Killers’ own discography (see the careful introspection in ‘Tyson vs. Douglas’) and from the Taylor Swifts and Dua Lipas currently dominating the conversation (just listen to the brilliantly bold ‘Wonderful Wonderful’ and slick deluxe-edition track ‘Money on Straight’). The Killers truly are masters of their craft – despite reports the band are attempting to heal their rifts through counselling following rumours of a potential break-up nearly five years ago, they have delivered one of the year’s best albums, and one of their most liberating and personal to date.

Back in 2004, after the release of Hot Fuss, Keuning stated his ambitions for the then-trailblazing band from Las Vegas. “Hopefully, we’ll be around as long as U2,” he said. “We just wanna keep putting out good albums.” Let’s hope they do.