You know that thing I said last week about it being a particularly busy day for new releases, probably because Q1 was coming to an emotional finale? Well, here’s a rather promising start to Q2, with the longest This Week In Records and the longest Spotify playlist we’ve ever compiled. Is it any good, though? Possibly. In the frantic rush to write about everything I may have forgotten to listen to most of it. And I do go mildly insane on the topic of pop compilations. I love Fridays. Give us more delicious musical fuel on records@theedgesusu.co.uk.

The Chainsmokers – Memories… Do Not Open

You might be familiar with Drew Taggart and Alex Pall for such things as being unreasonably successful over the last 12 months with songs like ‘Roses’ and ‘Don’t Let Me Down‘ and ‘Closer‘ and ‘Paris’ and ‘Something Just Like This,’ so it was pretty inevitable that they’d bundle some of it into a full-length album even if all their music really lends itself to is five-track EP releases that stream ridiculously heavily. What was slightly less obvious was the name – Memories… Do Not Open (opening of press release) or Memories….Do Not Open (opening of 1828-word Facebook post to accompany the release) or Memories…Do Not Open (Spotify and body of press release) or Memories..Do Not Open (iTunes) or Memories Do Not Open (cover art), it looks silly however you do it – and the lack of big name input, with Coldplay joining in for ‘Something Just Like This’ in the one display of properly fancy recruitment. If Collage is anything to go by then it’s not exactly going to be the most interesting 43 minutes of your life, but sometimes we just don’t deserve nice things.

Look, you know the drill by now: I write this column in the depths of the night but some people just have to be really awkward and hold back their releases until midnight for the US east coast – oh hey, Kendrick Lamar – and some go even more ridiculous by holding the music back until breakfast radio premieres. That latter route is the one that One Direction graduate Hairstyle is opting for as he follows Alex Zane and Niall O’Brien and Ricky Tomlinson in not being as alluring as Big Payno in terms of solo artistry, although at least we know what’s occurring: Nick Grimshaw’s been on holiday this week but there have been more teasers for the two-hour world exclusive pre-recorded Radio 1 interview on the station this week than there have been power intros, and Radio 1 loves a power intro.

Anyway, in absence of the song at the time of writing here’s a picture of Harry’s body double from the video shoot. 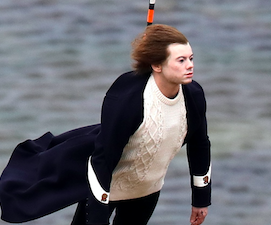 There are many things I could say about Father John Misty. Instead, here’s an interview he did on BBC Breakfast in which Charlie Stayt uses 54 words to ask a question to which the answer is simply that Jools Holland’s bookers booked him to appear on Later… because he makes music well. Best quote: “You’re someone who likes to sing about stuff.”

Here’s the album art for Pure Comedy in deliciously high resolution. Dig around here and it’ll tell you far more about the album than a setup like that ever could.

Or just check our reviews of ‘Pure Comedy‘ and ‘Total Entertainment Forever‘ and rejoice in the father.

A decade into releasing music under the RAC moniker – one originally referring to the Remix Artist Collective of himself, Andrew Maury, and Karl Kling – it is quite peculiar that André Allen Anjos’ first release via Counter Records still comes with an explainer that the name is pronounced Ar-Ay-Cee. That said, to anybody who has encountered one of his hundreds of remixes, ‘This Song’ will feel very familiar with its tasteful indie vocals – this time from Rostam of Vampire Weekend fame – coupled with delicious soft scoop synths for the first taste of this summer’s second album.

Good news, everyone! Your local supermarket now has a new CD to pop alongside those few copies of ÷ that haven’t yet been flogged to someone who decided the best accompaniment to their loaf of bread and Daily Mail is a harmless slab of thoroughly uninspiring twaddle. In the true This Week In Records spirit, here’s an attempt at 96 facts about NOW That’s What I Call Music! 96.