Shot in glossy DV black-and-white, Steven Klein’s exemplary video for Wolves continues to experiment with ideas from Famous – searching for a representation of autobiography, intertextuality and religious symbolism against the abrasive textures of The Life of Pablo. The video begins in silence, images alternating between low-angle pans of a forest at night and calligraphic trees reaching towards the full moon. This continues with an abstract image of undulating electronic lights and a small swinging lamp, casting a harsh pool of light on the ground below. It then cuts to a sequence of a man lifting up a string of collapsed dancers like marionettes, where they then stand fixed in black non-space. The introduction ends with a cut to quick images of rapid movement through the woods at night, apparently from the view of a wolf.

Arriving at the video’s main section; the dancers begin to circle the blackened space in oddly subdued, synchronized motion. The eerie shots of models walking endlessly forward – neutral expressions and unaware of one another – are intercut with fragmented images of nightclub debauchery. Shot through strobe lights that lend the look of stop-motion, it is disconcerting against the extended shots of Kanye crooning; his face strewn with tears and framed in a portrait-like handheld close-up. It recalls Dreyer’s compositions in The Passion of Joan of Arc. A statement that might sound silly, until you consider Kanye’s current fascination with re-contextualizing religious iconography and casting himself as a modern day martyr. He believes himself to be a representative of free speech and black identity, especially within the culture of high-end consumerism. 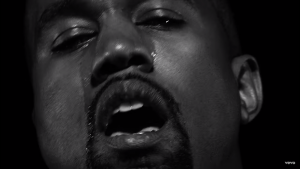 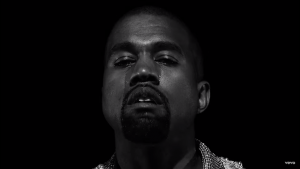 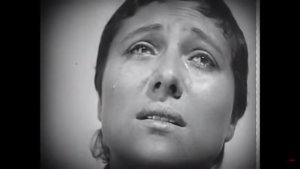 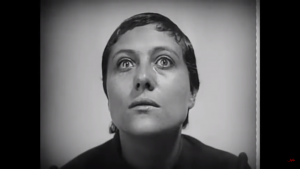 Wolves is more beautiful than Famous, but less rich in ideas. This is likely a result of the shift from Kanye – intellectually adventurous, but with only slight experience as a filmmaker – to fashion photographer Steven Klein as director. Klein has established a reputation for blurring the line between high fashion and avant-garde photography, though Kanye’s signature style still reverberates through the video.

The central metaphor is that social relations are little more than theatrical display. Towards the end of the video, disembodied hands caress Kim and Kanye. The line between public and private does not blur, it does not exist altogether. Eyes are everywhere, because when you’re an icon you are systematically objectified and projected upon by the public, who remain obscure to you. They have a delusion of intimacy in their minds due to the display of Kanye’s life, which is made explicit by journalists and photographers. Klein references this in the final section of the film as Kanye and Kim walk down a red carpet, hounded from all directions by paparazzi. As the video goes on, the movements of the dancers grow increasingly erratic, circling constantly around the central two as they connect purely through glances. The trajectory of the images reflects the gradually heightening paranoia of the lyrics: “Cover Saint/In lamb’s Wool/We surrounded by/The fucking wolves”.

Kanye has recently been fascinated by the gulf between inner emotions and the mundane ways in which they are expressed in everyday life, too often filtered through generic phrases and that risk robbing them of their base power. This theme is most explicitly explored in Bound 2, which alternates between the majestic crooning of Charlie Wilson and images of stray semen staining a mink carpet, intercut with 90s sitcoms. The song was perfectly complemented by a video which indulged in self-consciously garish images of sunsets, flocks of horses, and soaring birds – before Kanye and Kim appear on a motorcycle passing artificial footage of famous landmarks.

The video was almost universally panned at the time for being pretty in a hollow way, glutted with cliché imagery to the point that it resembled a perfume commercial. Yet, The Life of Pablo proved Kanye is far more engaged in paradoxes inherent to his style than it might initially appear. Not only is he openly struggling to find a way to reconcile Kanye the romantic with Kanye the cynic, contrasting the depths of his emotion with his uneasiness around sincerity, but he is also engaged with the language of advertisements. Bound 2 poses the question of whether a love is devalued if it’s expressed through greetings cards, mass produced love songs, and handed-down platitudes – together forming a standardized method of love that we can pour our most intimate feelings into.

Wolves doesn’t go as far as Bound 2 in its critique, but it features one hell of an image that draws on the same ideas: Kanye approaching Kim from behind, both looking straight at the camera and coming to an embrace. He croaks in his oddly heart-breaking monotone, “I know it’s corny bitches, you wish you could unfollow. I know it’s corny niggas you wish you could unswallow”. Their faces are blank and moist with fake tears, in an image that is oddly discomforting and confrontational; it’s a reminder of the exploitative nature of fandom. Specifically, how the 24-hour journalistic content cycle churns out every detail of a celebrity’s private life; capturing and magnifying it for public consumption. By projecting our fantasies and prejudices onto famous people, we’re de-personalizing them – drawing on the aspects they project to create a persona that has little to do with the individuals themselves. We then use this to judge them. Within this video, Kanye and Kim are offering themselves up as self-conscious commodities and sacrificial lambs simultaneously; acknowledging their fundamental unknowability to those who feed off their exploits, while also highlighting their complacency in exploiting consumer desire and curiosity.