See the line where the sky meets the sea? No, neither do I, but it’s not about us because Moana turns five!

As one of the newer Disney princesses, Moana just begs to be loved. With heart-wrenching music influenced by the likes of Hamilton’s own Lin Manuel Miranda, this story of love, loss and perseverance calls to every princess and prince no matter how old you are. I can’t tell you how many times these songs get played in special education classrooms on the daily, used as a means of calming the children after their chaotic lunch breaks.

What I love about this film is the strength that Moana shows. Gone are the days where princesses slept until they were saved with a kiss, waiting for their prince charming to rescue them. In recent years, a new generation of Disney princesses have brought with them the independence we want to inspire in young people today. This fierce daughter of a chief sets out with nothing but a boat, her grandmother’s spirit and a chicken with about as many brain cells as I have after a two hour statistics lecture. And yet, what does she do? She saves her people, even saving a demi-god along the way. 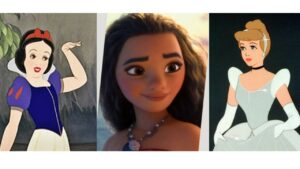 The animation brings this world to life, with vibrant colours and textures that create a crazy playground for your imagination to run wild in. It’s because of this that the magic of her story has such a firm grip on my heart. When we see Moana’s grandmother take form as a manta ray, the vivid light that guides her way can’t help but bring a tear to my eye.

Even if Moana insists she’s not a princess, what makes her one of the top Disney princesses of today? It has to be the abundance of personality that each character in the film exudes. Whether it’s a cheeky mini-Maui tattoo, a smooth dancing young boy, or even the sea, each leaves you loving them for their charms and quirks. Particularly as all of the previously mentioned examples don’t even have to say anything for us to love them nonetheless.

So in case it wasn’t clear, Moana will always be one of my favourite Disney movies. I’d be lying if I said I didn’t sing you’re welcome every time someone thanks me. But if you’re still saying it rather than bursting into demi-god rap, well then I’m sorry to say that you’re stuck in the past.

Moana (2016) was directed by Ron Clements and John Musker, certificate PG. Check out the trailer below:

An Education and Psychology student dabbling in writing as a means of avoiding everything else. Usually found eating pizza or chocolate.