This week has been packed full of local news, from a Turner Sims concert to commemorate the 400th anniversary of when the Mayflower left the port of Southampton, to TG‘s Blindly Dating pilot episode netting a release date. That’s not all though, as E3 confirms it will be taking place online again this year and an uplifting cinema survey that sees audiences keen to return to cinemas. Want to find out more? Well then, read this week’s Weekly Roundup below:

Our Headline of the Week

Local Headline of the Week 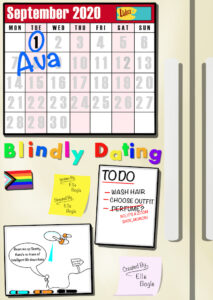 The upcoming TG original online show starring Annabel Hughes (Midsummer’s Night Dream) and Josiah Chamberlain (Macbeth), along with Mika Woods (Midsummer’s Night Dream) and Daisy Gazzard (Be More Chill and Made in Dagenham), is written and directed by TG’s Elle Bogle. Conceptually brought about during the current COVID-19 pandemic, the show will be TG’s first performance/release in a year, after the cancellation of their show No Quarter back in March 2020. Yet, TG has used this opportunity to keep its society members involved in acting and theatre and proven to be a success among those auditioning as well as those helping the gestation of the project.

The show follows Libby, a young woman living alone and going on a succession of blind dates. The dates, set up by her best friend Ed, range from the okay-ish to the hilariously embarrassing. As he sifts through his singletons address book trying to find her a match, Libby will always find a myriad of reasons to end the dates before she gives them a chance to truly begin… As the series progresses, we gradually discover more and more about her and Ed and uncover, along with them, what lies beneath the surface.

Elle, who has studied at the University for three years, is set to continue to produce the show, with a bi-weekly release schedule, while concurrent episodes will see a host of diverse talent of writers and directors along. While Elle promises to continue to write later episodes, she’s always been insistent that the show be a TG project that involves as many TG members as possible. Even the show’s editing was done by TG’s own Tom Usher, the current station manager of SUSUTV. So fuelled by enthusiasm and a lot of heart, tune in to watch the first Blindly Dating episode happening on April 12th!

Check out our review for Blindly Dating by clicking here. You can watch the premiere of Blindly Dating on Youtube at 6 pm on April 12th by visiting the link here.

Survey Finds Audiences are Keen to Return to Cinemas

In the U.K., drive-in cinemas will be allowed to open as of April 12th, while indoor cinemas suffer a slightly longer waiting period till May 17th, but these figures are hopeful in revealing a possible recovery for the film industry after the devastation that Covid-19 reeked on it. After an intermittent year of cinema closures, this date of May 17th is a hopeful one that promises even a respectable line-up of films (Cruella anyone?).

The survey doesn’t stop there though, and also analysed the date of those who managed trips to the cinema in between the multiple 2020 lockdowns. It went on to shed light that a staggering 93% of those who attended a cinema during the pandemic enjoyed their experience, with 99% insistent that they were happy with the new health and safety measures. These safety measures for many cinemas were wearing masks when not seated, reduced audience numbers and empty seats around guests, and one-way systems among many other things.

This news also comes hot on the heels of the release of Godzilla vs. Kong (2021), which managed a respectable $48.5 million opening and set the pandemic debut record in the meantime. What we’re seeing is a hopeful indication that the film industry is slowly picking back up and that audiences are eager to watch big blockbusters once again. While this is all still early days and simple facts and figures, there’s an inkling of hope that a return to normality can be somewhere in the future.

On April 6th the official E3 Twitter page confirmed that they would not be hosting their expo in-person this year.

After the pandemic caused E3 to cancel last year, with a large number of developers moving online to do their own expo instead, this year’s E3 has decided to continue with an exclusive online event, promising many of the developers we love to hear from each year. While many fans are no doubt sad the expo won’t go ahead in-person, the decision is an important one considering the continuing crisis and pandemic that is happening in America and across the world.

With the dates, June 12th-15th cemented, there’s been little news on what to expect as of yet, but the Twitter announcement provided a link for people to sign up to so that they can get all the information they could dream of as soon as it’s released. Here’s hoping for a great E3 event (and a possible update on Starfield would be nice).

WELCOME BACK! It’s been hard waiting quietly as we got ready for today, but we are thrilled to officially announce our plans for June 12th-15th!

Sign up for updates below & get hyped for the return of the most exciting show in video gaming: #E32021https://t.co/QOa74rVCXB

Trailers of the Week