In our penultimate Weekly Roundup this year, we’re looking at some local Southampton news. From a chance to take part (or simply watch) Univision or sign up and to he unveiling of a new West Quay mural; December is filled with events, excitement and news to keep you busy. Read below to find out more:

Announced earlier last month, Univision will see Universities across the country duking it out for a chance to be named the number one act. As a singing competition that takes obvious inspiration from Eurovision, the University of Southampton’s Student Union have taken to social media to encourage students to submit an entry video for a chance at representing the University. Requiring a 2-minute video, filmed in landscape and observant of social-distancing guidelines (you can find the full list of requirements by clicking here), the deadline for submission is quickly approaching as Wednesday 16th December. Students can either perform as a solo act or as a group, with the first round seeing their performance shared on social media platforms like Facebook for other students to vote who they wish to represent the University in this competition. From these votes, the finalists will be chosen to head down to Surrey on March 14th to take part in a large live event styled liked the iconic Eurovision to select the overall winner (and the university they represent). So if you haven’t auditioned yet and would like to be in for a chance to be a part of this great event, then there’s still time!

Likewise, check out the University of Southampton’s own Corin Halloway, Vice-President of Activities, singing his own rendition of an iconic ABBA song in the hope of luring you to take part!

Southampton’s West Quay shopping centre has unveiled an artistic mural which has been installed next to the new toilet and private feeding facilities.

Unveiled on December 7th, the mural is a unique art piece designed by local artist Kev Munday as part of Go! Southampton and Southampton City Council’s Southampton Street Art Project. Designed to “appeal to all ages and includes a number of local landmarks in a hope to evoke a sense of civic pride and community spirit in a difficult time for everyone in the city.  The artwork is the latest in the line of street artworks by Southampton Solent graduate Kev Munday popping up in public areas across the city.”.

For all those wanting to see the amazing piece in person, it can be located on Level 3 of West Quay, adjacent to Boux Avenue. Or you can check out an image of the painting below: 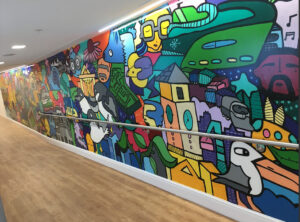 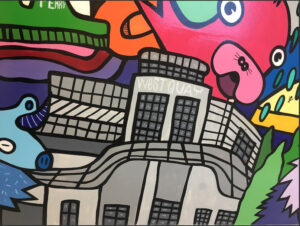