In a particularly voluptuous week for news, we’ve had calls for celebrations and moments of sadness. From legendary actress Dame Diana Riggs‘ sad passing, the pushing back of WW84‘s, the release date of the incoming Sony PS5 Showcase and the newly announced ‘Operation Sleeping Beauty’, this week has packed in all the highs and lows. Check out this week in the news below:

Global Headlines of the Week:

In an announcement on The Academy’s Twitter page, new inclusion and representation standards have been put forward for a film to qualify for the Best Picture category. Starting from the 96th Academy Awards, any film wishing to be considered for Best Picture must meet two of the four standards which read as follows:

A) On-Screen Representation, Themes and Narratives

B) Creative Leadership and Project Team

These new standards have been created after The Academy received strong backlash in the past for failing to show diversity across its nominations. Starting back in January 2015 when Activist April Reign tweeted ‘#OscarsSoWhite‘, The Academy has been under increasing pressures to promote diversity within the film industry. After a long struggle to which some now consider too little too late, The Academy has announced these standards in a hope to spurn greater diversity.

While these standards are certainly a step in the right direction, some critics have rallied against the standards for being too vague as well as failing to consider the other categories which also suffer from a lack of diversity. With only 14 Black Actors having won an Academy Award, many hope that The Academy’s acknowledgement of the inherent race issue within its ceremony will quickly lead to more change happening sooner rather than later.

After a flashy new trailer premiering just over three weeks ago for the upcoming DC Universe film, Wonder Woman 1984 (WW84), Warner Bros. has made the decision to push back the film’s release date from October 2nd to December 25th.

As Coronavirus begins to peak again all around the world, cinemas and the film industry struggle to deal with weakened revenue streams and the problematic atmosphere to which cinemas are. A breeding place for the highly infections disease and social distancing guidelines decreasing the maximum capacity at which cinemas can work at means that films set for release during the current pandemic have needed to adjust to smaller ticket sales or adopt different methods of distribution. After Warner Bros. release of Christopher Nolan‘s science-fiction epic, Tenet struggled to draw in audiences during these tumultuous times and make a profit; Warner Bros. has decided that delaying WW84 will put the film in a better place for making money. While this news comes at the heartbreak of many fans and ‘cinephiles’, no one can blame Warner Bros. for adopting a safer and more secured approach to the film’s release. However, with the unpredictability of the current pandemic, it is possible that WW84 may see even more delays down the line as well as other highly anticipated releases.

Watch the trailer for WW84 below:

In some delightfully pleasant news, Bookshops around the country have reported a record week in sales for books since the release of the Harry Potter novels.

With new lockdown measures coming into force as of today, many households are once again looking for ways to pass the time instead of going out and having a “normal” life. In one particularly wholesome way, this has brought a boom in bookshop visits as people clamber to get hold of anything to read to help prevent their brains from rotting with boredom.

When lockdown initially started back in March, streaming services like Netflix, Amazon Prime and Disney+ all desperately struggled to deal with the increase in demand and traffic that headed their way after a furlough scheme meant a higher number of individuals staying home and watching TV. However, after months of binging and an approaching second lockdown, it looks like many people are turning their eyes to a new form of entertainment – books. With higher numbers of people heading to bookshops to purchase some entertainment, the book industry seems fit and ready to righten itself after a particularly hard time for all entertainment industries.

Here is to hoping that bookshops continue to report continued strong sales and that more people continue to discover the magic of a good book!

Sony Lines Up a PS5 Showcase

In an announcement for an announcement (only Sony would do this), Sony has announced the next date for its PlayStation 5 Showcase which will take place on September 16th 1 pm (PDT)/9 pm (BST).

The announcement follows a few days after Xbox unveiled the second edition of their upcoming Xbox console as well as a respectable price tag of £449/£249. While many fans anticipated Sony to make the reveal earlier last week, the tech-giant instead waited for Microsoft to unveil their console first before moving ahead with their own plans in what can only be a strategic move.

The PlayStation 5 Showcase is expected to unveil the PlayStation 5’s and PlayStation 5 Digitial Edition’s prices, release date and preorder date as well as unveil new games which will be launching alongside the console as day one exclusives. As speculation runs rampant, many rumours have begun to circulate that Sony plans a November 20th release in North America and a late Holiday Season release for the rest of the world. Other rumours have also popped up hinting that Sony has cut its original console price after Microsoft’s surprise unveiling of the unmistakenly cheap Xbox Series S as well as other expectations of surprise game unveils and much more.

The event is expected to last 40 minutes.

You can read more about Microsoft’s and Sony’s console war by clicking here and watch the announcement for it below: 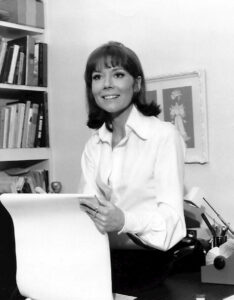 Dame Enid Diana Elizabeth Riggs was an English stage and screen actress with a career that spanned almost 60 years. First appearing on stage in 1957 in the Bertolt Brecht play The Caucasian Chalk Circle and joining The Royal Shakespeare Company in 1959, Riggs had gone on to play significant roles such as Medea for which she won the 1994 Tony award for Best Actress in a Play. Riggs’ TV roles soon gained prominence in through the 1960s where she reappeared in the TV show, The Avengers, and even went on to play Countess Teresa di Vicenzo, the wife of James Bond in On Her Majesty’s Secret Service. Riggs’ last notable role was her appearance as Olenna Tyrell in Game of Thrones.

Riggs passed away while at home from cancer which she was previously diagnosed back in March 2020.