Read more
You are at:Home»News»Global News»Top DJ’s to perform at Rave The Vote
By Morgan McMillan on July 8, 2020 Global News, News

Live Streaming channel – Lost Resort TV – are debuting a new episodic digital live stream called Rave The Vote, in hopes of increasing voter registration in the US ahead of the Presidential election in November. The livestream consists of DJ sets and live performances consisting of artists of multiple genres across the United States in hopes to encourage music fans to take part in one of the most important elections to date.

The line-up consists of star-studded DJ’s from The Martinez Brothers (Bronx, New York) to DJ Jazzy Jeff (Philadelphia), who is most known for his collaborative work with The Fresh Prince, otherwise known as Will Smith. Rave The Vote’s audience will also be gifted with educational programs by community leaders, industry members and artists on why it is important to use their constitutional right of the vote.

Rave the Vote is an important initiative especially regarding the falling number of Americans who are voting in the presidential election. For the past 50 years less than 60% of America’s eligible voters have casted their vote in the presidential election and this is decreasing with each year. In 2016 only 46% of young voters turned out in the election compared to 71% of those 65 years and older, this Rave The Vote is in hopes to encourage young voters to use their power to change the way their country is run.

The first episode of Rave The Vote takes place on 24 July, you can RVSP for the first episode here. The other episodes take place on 14 August, 11 September and 2 October. Check out the full line-up below. 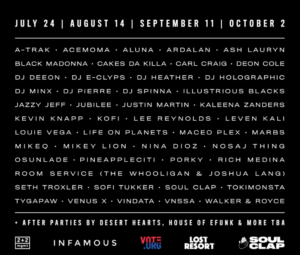