Southampton University English student Elizabeth Sorrell has used her lockdown time as a creative opportunity to live stream 12 plays over six days in aid of the NHS and Black Lives Matter UK. Running from June 22nd-27th and streaming from 5:30 pm each night, we will see two different plays performed by different casts from various backgrounds and ages. From performing Greek and Shakespearan classics to 20th Century masterpieces, the ‘Charity Live Stream’ promises to be a fun event for all those literature and theatre enthusiasts.

Talking to Elizabeth about her event, when asked why she decided to create a theatre-based charity live stream, she said:

“As we all know, theatres are being hit particularly hard during this pandemic, but I wanted to do something small to try and fill that gulf. I’ve tried to go into this with humble expectations, but I sincerly hope that this achieves even a semblance of the impact that theatre has on people.”

Elizabeth’s statement certainly rings true when considering how theatre companies across the country have had to cancel performances and adapt to the current pandemic. However, embracing live-streaming and YouTube, many shows have moved to formulate online experiences by either doing read-throughs or making previously recorded versions available to the general public in similar hope to Elizabeth’s dream of keeping the ‘semblance of the impact that theatre has on people’.

When asked what led Elizabeth to choose the NHS, she said:

“We all have bodies which are imperfect, we all become ill or injured, we all need help sometimes, and the NHS is a service based on humanity, compassion, and kindness. Unfortunately, we have not see it treated as such, especially recently. […] We (as people who at least once in our lives have needed it) should try to do something to show some proper gratitude.”

While her motivations for choosing the Black Lives Matter charity were:

“In light of recent events such as the murder of George Floyd and the consequent protests, I realised that splitting the proceeds between the NHS and Black Likes Matter UK makes complete sense. People of colour are disproprotiantely vulnerable in this pandemic, many theories abound to as why. […] The NHS is largely upheld by people of colour, and they disproportionately will be needing it as well, so to me, splitting the donations down the middle and donating to both seemed like the most practical thing to do.” 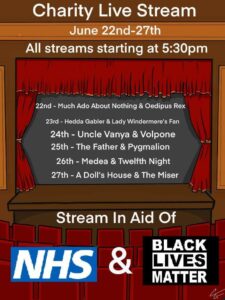 June 22nd – Much Ado About Nothing & Oedipus Rex

Join Elizabeth Sorrell and actors in their live stream by clicking here on the aforementioned dates. And if you want to help make a difference then feel free to donate by clicking here.*