This week has given us dozens of festivals announcements and, to follow suit, Truck Festival have announced their line-up for the 3-day bender from 31 July to 2 August – and boy, it’s indie.

The 23-year-old festival has been labelled the “Godfather of the small festival scene” and is the UK’s longest running and most popular small festival in the UK. It is taking place in a small village in Oxfordshire’s countryside only adds to this small festival vibe, its anti-major festival stance makes for a great atmosphere.

Bombay Bicycle Club will be headlining the Friday, and The Kooks the Saturday, but the most exciting headliner for this festival is Truck Festival royalty, Catfish and the Bottlemen, will be headlining the Sunday night ending the festival on an amazing high. Catfish and the Bottlemen perform festivals yearly and have become experts at wooing a festival crowd so be sure to check them out this year at Truck Festival.

Other standouts expected to perform at Truck are Sports Team, Magic Gang, Swim Deep, Pale Waves, Lauran Hibberd and most shockingly Matt Maltese. It will be great to see how Matt Maltese will perform at a festival setting considering his music is quite slow and melancholy, but maybe he will spice it up a little for us this festival season.

Although the current line-up is dominated by indie artists, there are still even more to be announced, so who knows: we may be seeing an even wider variety of genres here too.

Truck Festival runs from 31st July-2nd August 2020 in Hill Farm, Oxfordshire. Check out the line-up below, or click here for more information on how to get tickets. 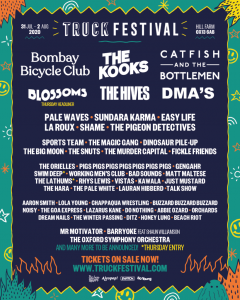