It’s been a busy week for Slam Dunk, with 10 new bands announced over the last few days.

This follows the earlier announcement that The Wonder Years will be playing their album The Upsides in full for it’s tenth anniversary at this year’s festivals.

Slam Dunk also announced While She Sleeps to headline their Jägermeister stage. This comes at a great time for While She Sleeps; after their European tour this month – including a sold out Brixton Academy show – they will embark on their first headline US tour, returning in March with a couple of months to spare before Slam Dunk starts.

For the second time, Slam Dunk are bringing NOFX’s Punk in Drublic festival to the UK. This is a highlight for any punk-inclined festivalgoer; the Punk in Drublic festival itself has been a staple for NOFX fans in the US and Europe for a while and now the UK gets a taste of it for themselves. This year the stage will feature NOFX as usual, with new additions Me First And The Gimme Gimmes and The Suicide Machines joining the rest of the punk favourites on the stage.

Slam Dunk this year takes place in Leeds on 23rd May and in Hatfield on 24th May. The full line up as it updates can be viewed here, and tickets can be bought here. 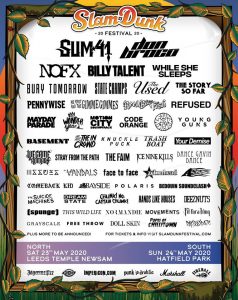