A memorial event for the band Her’s has been announced alongside the posthumous release of a poignant new music video for their track ‘She Needs Him’.

The duo, made up of Stephen Fitzpatrick and Audun Laading, made several visits to Southampton in 2018 and 2019, culminating in a five-star gig at Heartbreakers this February. Oozing talent and goofball-ness, their unique slice of dream pop lived and breathed with the eclectic characters that inspired their music. 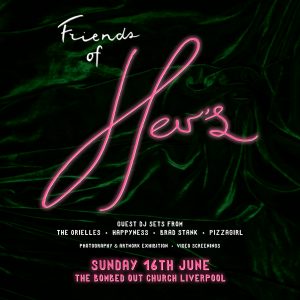 The memorial event, dubbed ‘Friends of Her’s’, will take place at The Bombed Out Church in Liverpool on June 16th, but label Heist or Hit hope that fans up and down the country will hold their own house parties on the same day in tribute. As Heist or Hit explained, “Stephen and Audun were always very humble and particularly loved house parties with friends.” Fans can share their own events on social media by using the hashtag #friendsofhers.

Organised by Stephen’s and Audun’s friends and family, the event in Liverpool will feature DJ sets from the likes of The Orielles, Happyness, Brad Stank and Pizzagirl. It will also feature an exhibition from official band photographers and of the band’s artwork, as well as exclusive video screenings, street food and bars. As Heist or Hit explained, “whilst we continue to feel devastated by the loss of our friends, it was very clear from the outpouring of love for them that there should be an event to celebrate their lives and the amazing music they brought to the world.”

This very much reflects in the use of the proceeds from the event. The money raised will go towards supporting the local homeless community; an ongoing series of workshops and projects will be organised, with a focus on rehabilitation through the arts and music, that will serve as a fitting legacy for Stephen and Audun. The warmth and kindness they showed to fans reflected a deep passion for music and concern for the well-being of others.

The new music video for ‘She Needs Him’, taken from their debut album Invitation to Her’s, is the work of French motion designer and illustrator Sébastien Séjourné. The band had initially started work with Séjourné in December 2018, and Mick, Martin and Patrick of the label felt that completing the video would serve as a fitting tribute to the band and their fans.

Watch the beautiful music video for ‘She Needs Him’ below, and make your donations here. Donations can also be made to the band manager Trevor Engelbrektson’s fund to help support his family here. And finally, tickets for the ‘Friends of Her’s’ event go on sale at 9am today and can be purchased for £5 here.