This year’s Glastonbury line-up has now been announced, with more than 60 acts featured. The festival begins on 26th June at Worthy Farm, with full coverage available via TV, online and BBC Radio. Stormzy had already been confirmed as the Friday night headline, but it has also been confirmed that Kylie Minogue will take the “legend slot” reserved for Sunday afternoon.

Gender equality is something the festival was keen to focus on this year. Emily Eavis, the festival owner, said that: “The gender balance is something I consider at every stage of the booking process.” 42% of the current line-up is female, although the three Pyramid Stage headliners are all male.

The festival sold out in just half an hour last October, but cancelled tickets will be put back on sale on Sunday, 28th April. You can buy those here.

View the picture below to see the full list of headliners: 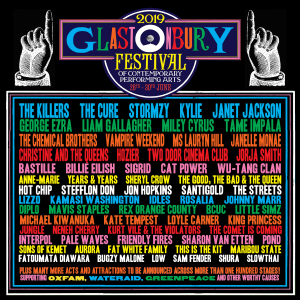