Read more
You are at:Home»News»Global News»Nostalgic News: Matilda was published 30 years ago
By Ellie Brain on October 1, 2018 Global News, News

Matilda, published 30 years ago on 1st October 1988 by the 70-year-old Roald Dahl, continues to enthral and inspire audiences of all ages to this day.

I distinctly remember reading Matilda aged about 7, and feeling a connection to this strong child who used hatred and ignorance to her advantage, and used reading as a form of escapism. It made me excited to read – I wanted to have that power too. 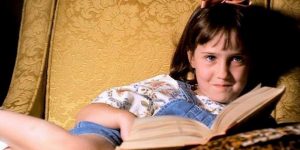 Matilda tells the story of an incredibly gifted 5-year-old girl, Matilda Wormwood, who, after being continually rejected by her family and unappreciated by almost everyone in her life, she uses telekinetic powers to outsmart her parents, brother, and headmistress-from-hell, Miss Trunchbull.

When Matilda was first published, it received good but not outstanding reviews. Perhaps an unintentional metaphor of how an underestimated girl, or in this case novel, could go on to do some extraordinary things. Since being published, the novel has been turned into a 1996 movie starring, directed, and produced by Danny DeVito. It has also become a huge success on stage, winning Olivier and Tony awards, in the form of an all-singing, all-dancing, Matilda the Musical, with songs by Tim Minchin.

If this article has got you feeling nostalgic, then why not book tickets to see the musical? Tickets can be bought here.

Remind yourself of the 1996 film with one of its best moments below: