The Edge was crowned as the coveted Best Student Media Department accolade at the 2018 Media Ball Awards last night (Monday 7th May 2018).

It marked the end of a fantastic year for the publication, which already picked up a Best Collaboration Award at the Student Publication Association Regional Awards in the Autumn for our Mental Health Magazine.

The Edge had also more recently been nominated as Best Specialist Publication for the SPA National Awards 2018, which took place in April. 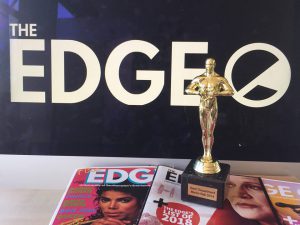 The Southampton University Student Film Festival also won the Award for Best Media Event for a third year in a row, with the judges praising the continued improvement.

For The Edge‘s Outstanding Contribution Awards, Highly Commended was given to Records Editor and Executive Meg Holland and Sam Law for their sterling work on ‘This Week in Records‘, as well as a consistently excellent section this year, whilst Teague Hipkiss (unsurprisingly) was the Winner after superb design work was lauded at the SPAs.

Media Ball 2018 took place on Monday 7th May 2018 at the Harbour Hotel in Ocean Village, Southampton. A full list of Award Winners can be viewed here. The Edge expresses our congratulations to all other winners, and thanks everyone for their superb support of the event.