Read more
You are at:Home»News»Global News»Gaming at a Glance: Brace for Impact
By Liana Dent on May 5, 2018 Global News, News
This month’s Gaming at a Glance sees Kratos arrive back on the PlayStation 4. The series has made some changes for the better – God of War is said to be the best in the series yet. Meanwhile, Nintendo Labo brings a new dimension to console gaming, and Fortnite‘s season 4 finally strikes, bringing with it some serious shakeups… 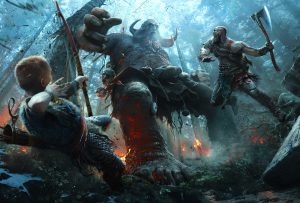 Kratos returns! God of War arrived on 20th April, available only on the PlayStation 4. The series’ action-adventure games are well-loved for their dramatic narratives and satisfying combat, all based in the world of Greek mythology – until now. This is the first God of War game in five years, and according to the developers, the first in a new era for the franchise, with Kratos now in the land of the Norse gods.

Core mechanics such as camera control have been altered, and Kratos has hung up his iconic dual-wielded blades in favour of an axe (judging by that beard, he’s going for the lumberjack look). And these changes are hitting all the right notes – reviews say God of War is the best of all eight games in the series. Boasting breathtaking scenery, beautifully fluid combat and a complex cast of characters, if you haven’t spent the last two weeks on your PlayStation, make some time to embark on Kratos’ next journey very soon. 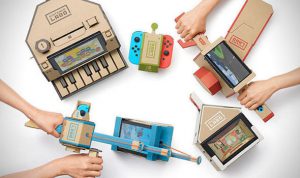 Although overshadowed by God of War‘s huge sales, this has been a big month for Nintendo. Nintendo Labo arrived on 27th April: cardboard toys constructed at home and controlled with the Nintendo Switch. Right out of the box, you can build things as complex as racing cars, pianos and fishing rods. One set even lets you make a giant robot suit to wear as part of a VR-esque experience. But the DIY element means it’s possible to construct and code many more things than the instructions suggest. There’s a huge potential for replay value – the Labo brings endless new ways to use the Switch. 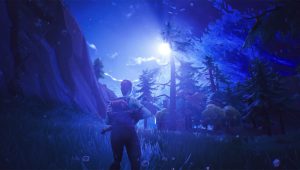 After the long wait, Fortnite‘s Season 4 began on 1st May. And with it comes answers to the mysterious comet. Appearing with little fanfare in the sky over the map, hints slowly started to appear over the last month. The outlandish theorising began, covering everything from the speed of the comet’s approach to morse code translations – but its nature remained hidden.

Now the comet has struck, destroying part of Dusty Depot (now Dusty Divot). Smaller craters can be found all across the map. This update also introduces a brand new northern area, Risky Reels, along with a new questline and cosmetics to welcome the new season and the big changes it brings to Fortnite‘s future.
Next time: Total War Saga: Thrones of Britannia will be out on 3rd May. On 4th May, Mario’s nemesis steals the spotlight in Donkey Kong Country: Tropical Freeze, while Hyrule Warriors: Definitive Edition arrives on 18th May.
Check out the story trailer for God of War below:
Share. Twitter Facebook Google+ Pinterest LinkedIn Tumblr Email