The 33rd edition of Tate’s award for visual art has shortlisted four artists who examine overtly political subjects, such as human rights abuse and post-colonial migrant identity, in their work.

The honoured artists include Forensic Architecture, a cross-media collective of 15 members, including film-makers, lawyers, and software developers, who use 3D models and found footage to uncover the truth about human rights abuses and other crimes. Their work acts as both legal evidence and art, using mobile phone footage from bystanders of the Grenfell Tower fire in their presentations, as well as creating architectural models to investigate drone attacks in the Middle East and bombings in Syria.

Also nominated is Charlotte Prodger, a queer artist based in Glasgow, whose work includes a film shot on iPhones that earned her praise from the jury for: “the nuanced way in which she deals with identity politics.” Naeem Mohaiemen, raised in Bangladesh but born in London, is commended for his films examining colonialism, migrant identities, and left-wing politics; and Luke Willis Thompson, a London-based New Zealander, completes the shortlist.

Thompson creates politically charged silent black-and-white films based around stop-and-search policies and killings. His work includes a moving portrait of Diamond Reynolds, who live-streamed the aftermath of the fatal shooting of her partner, Philando Castile, by a police officer in 2016.

Alex Farquharson, director of Tate Britain and chair of the Turner Prize jury, said that this year’s panel recognised: “an outstanding group of artists, all of whom are tackling the most pressing political and humanitarian issues of today and how important the moving image, in various formats, has become in exploring these debates.”

First awarded in 1984, The Turner Prize is given to a British artist (an artist either working primarily in, or that was born in, Britain) whose work will then be exhibited at Tate Britain from September 25. The winner, announced in December, is awarded £25,000, with £5,000 going to the three remaining shortlisted artists.

Additionally, this year, BNP Paribas is funding a scheme to give under-25s free entry to the exhibition for the first 25 days of its run. 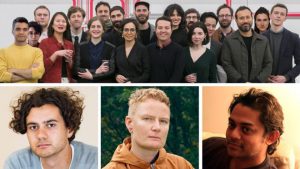