Tickets for Southampton’s very own Common People, held on Southampton Common over the weekend of 26th-27th are still available.

Last year we had high praise for the festival, which has been an annual event since 2015, and this year the lineup looks more outlandish than ever. 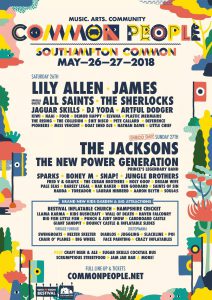 Headlining the Common Stage on the Saturday will be pop legend Lily Allen – back with a bang and hoping to promote Shame, her first album since 2012 and due out later this summer – backed by alternative legends James. Sunday is set to feature a disco takeover, as Prince’s legendary band The New Power Generation warm-up for The Jacksons (yes, the Jacksons!).

As well as the above, the event promises sets from indie up-and-comers The Sherlocks, ’70s and ’80s disco legends Boney M (of ‘Rasputin’ fame), and a return of the bizarre but brilliant Common People favourites and Elvis/Nirvana tribute band Elvana. In addition, the event promises to bring plenty of fun away from the main stages with the Bestival inflatable church, the “World’s Largest Disco Ball”, and of course the now-infamous Jam-Jam Bar, alongside much more.

One-day and weekend tickets are now on sale, and can be purchased here. Check out highlights from last year’s Common People festival below: