Rather than presenting him as a young boy, the newest incarnation of the bear’s pal is a fully-fledged adult, played by Ewan McGregor, although he finds himself stuck in the doldrums of life and still has a lot to learn from his iconic yellow friend voiced by long-term Pooh actor Jim Cummings. 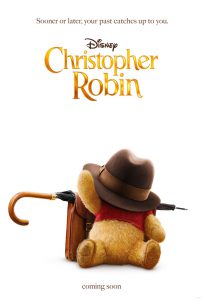 and work, finding himself forced to cancel a family get-away with his wife (Hayley Atwell) and young daughter to stay in London and sell luggage for his demanding boss (Mark Gatiss). The trailer also offers a short but memorable shot of the reunion between Robin and Pooh, which is set to be the backbone of this whimsical fantasy.

Director Mark Forster is much more upbeat than Christopher, however. Speaking to Entertainment Weekly, he waxed lyrical about Christopher Robin, stating: “The movie is so full of joy and emotion and also of scenes that I think are very timely.”

Forster also correctly points out the wisdom of the One-Hundred-Acre Wood gang. “I believe he’s not just a lovely teddy bear for children to play with or who can put you in a good mood. There’s this timeliness to him, and his Pooh-isms, as naive as they sound, there’s always so much truth to them. He doesn’t take himself seriously, but there’s so much substance. They make you smile, but at the same time, you think, he’s so right.”

Christopher Robin also stars Chris O’Dowd as Tigger, Brad Garrett as Eeyore, Toby Jones as Owl, Nick Mohammed as Piglet, Peter Capaldi as Rabbit and Sophie Okenedo as Kanga. It is due to be released 3rd August 2018. Check out the trailer below: