Just a week after their initial lineup announcement, Reading and Leeds Festival have released over 40 more artists set to perform at this year’s festival, as well as the stages.

The news comes after massive fan outrage following last week’s first look at the bill, with many festival-goers panning the lineup for focusing too heavily on hip-hop and pop at the expense of the festival’s usual rock-heavy focus. Alongside the likes of Kings Of Leon and Fall Out Boy, the reveal that rap sensation Kendrick Lamar, BRITs winner Dua Lipa, rising star Sigrid, and grime legend Skepta would feature heavily on the bill divided opinion. 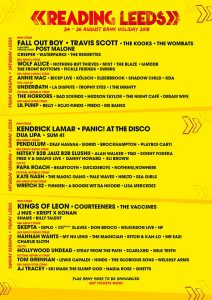 This week’s announcement puts emphasis back on rock. Punk duo Slaves, rising rockstars Shame, longtime indie favourites The Vaccines, and ’00s legends The Kooks all have high places in the lineup. They’re joined by a whole host of the biggest names in rock and indie music, including Fickle Friends, Deaf Havana, Don Broco, and Billy Talent, as well as many crowd-pleasers outside the rock sphere such as Kate Nash, Wilkinson, Pendulum, and Travis Scott.

Although the announcement sees the festival shift back towards its roots somewhat, festival organizer Melvin Benn defended last week’s shock reveal. “The key thing about any festival is that you don’t stand still,” he told the BBC, adding that “You can’t keep drumming up the same acts and expect people to continue to come and see them. Festivals have to be a reflection of what the public are listening to.”

Tickets for Reading and Leeds 2018 can be found here. Check out highlight’s of last year’s festival below: