Read more
You are at:Home»News»Global News»Gaming at a Glance: Nintendo Labo and Harry Potter
By Liana Dent on February 6, 2018 Global News, News
Nintendo continues its console innovations. The Nintendo Labo allows players to build accessories assembled from cardboard, creating new ways to use the Nintendo Switch. The end of January also sees the beginning of a new chapter in the wizarding world. Harry Potter: Hogwarts Mystery has been announced, with a free demo out now on the Google Play Store. 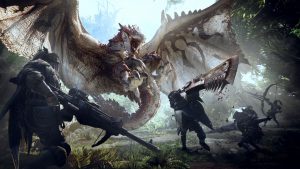 Beginning with this fortnight’s biggest new arrivals, Monster Hunter World was released on 26th January for PlayStation 4, Xbox One and PC. The return of the long-running RPG series has been given stellar reviews, with many crowning this title as the best Monster Hunter yet. Dragon Ball FighterZ was also released on the 26th, a visually stunning homage to the anime series available on PlayStation 4, Xbox One and PC.

On 24th January, Overwatch released one of its biggest ever updates, with a new map full of nods to other Blizzard games past and present. The update also features 100 cosmetic items ready to be discovered (whether through hours of gameplay, or from putting your overdraft into a few hundred loot boxes).
The Nintendo Switch’s first upgrade will be released on 27th April – in the form of cardboard. Continuing the company’s long history of pioneering console designs, the Nintendo Labo allows gamers to create their own Switch accessories to use any way they want. The cardboard sets are assembled at home, and the Switch’s Joy-Con controllers are placed inside to create the various ‘Toy-Cons’ that can be built. This results in creations as complex as pianos, racing cars and robot suits. 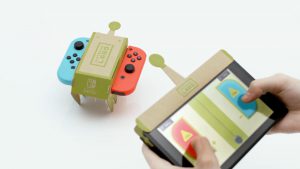 Because the Toy-Cons are built at home, players can gain an understanding of how cardboard becomes controller, how a reel on the fishing rod can function, how handmade pulleys interact with the Switch’s cameras. This inside knowledge helps players figure out new applications for the Labo. In the case of young gamers, it can be used to teach coding and engineering principles, encouraging deeper considerations of what they’re playing and how it works.

The Labo strikes the elusive balance between making video games educational without forcing the lessons, which potentially gives the Switch huge appeal to parents. And older gamers can build themselves giant robot suits a la Pacific Rim. What’s not to like?
As the dust from Breath of the Wild and Mario Odyssey settles, the Labo might be just what Nintendo needs to propel the Switch to new heights in 2018.
After building with cardboard and making robots, continue reliving your childhood with a return to Hogwarts. Harry Potter: Hogwarts Mystery was announced earlier this week with a teaser trailer, and will be released on Android and iOS. But you might remember another Potter mobile game was announced in 2017. Harry Potter: Wizards Unite is currently in development with Niantic, the creators of Pokemon Go. While both games will be out later this year, it seems that Hogwarts Mystery will be first, as the first twenty minutes of the game are already available for free on the Google Play store. 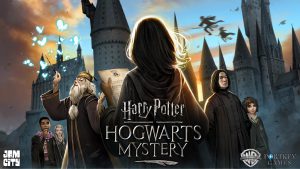 Hogwarts Mystery is story-based, allowing people to create their own character to interact with Hogwarts and its inhabitants, while Wizards Unite has the potential to become the next Pokemon Go thanks to Niantic’s success. After Pokemon Go‘s unprecedented popularity, Warner Bros. have clearly recognised the potential in combining a beloved franchise with the ubiquitous smartphone. On the other hand, they face the task of keeping players interested once the initial hype dies down, something that Pokemon Go has struggled with.

These will be the first titles released by Warner Bros.’ Portkey Games. This new label has promised to release multiple new Harry Potter games for mobile and consoles. In creating Portkey Games, Warner Bros. has declared its faith in Hogwarts Mystery, introducing it as the first of many successful Potter games to be released over the coming years.
Next time: Feburary sees the re-release of many classic titles, including Bayonetta, Age of Empires: Definitive Edition, and most notably, Shadow of the Colossus. This will be a complete remake of the iconic PlayStation 2 adventure game, and is released for the PlayStation 4 on 6th Febuary. Will it be a worthy successor to the original?
Check out the trailer for Nintendo Labo, out on 27th April in the UK, and see how Nintendo’s newest idea fits together:
Share. Twitter Facebook Google+ Pinterest LinkedIn Tumblr Email