Read more
You are at:Home»News»Global News»First look at A Series of Unfortunate Events series 2
By Sophie Jones on December 8, 2017 Global News, News

In decidedly dreadful news, Netflix have released a set of photographs from the second series of their adaptation of Lemony Snicket’s book series via Twitter and Entertainment Weekly.

The second series will cover books 5 to 9 – The Austere Academy, Ersatz Elevator, Vile Village, Hostile Hospital, and Carnivorous Carnival.  Executive Producer, Barry Sonnenfeld, said of the new series: “Tonally, we have more action, and things are little darker and sadder.”

Neil Patrick Harris, who portrays the villainous Count Olaf, added: “I think season 2 ends up being a little bigger in its scope and scale, but also allows for a little bit of a more fevered heartbeat from our protagonists.” 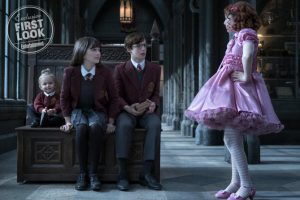 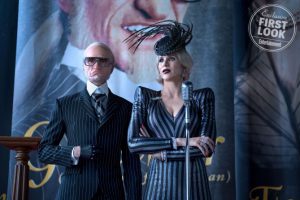 The Baudelaire orphans are then moved to the care of Esmé Squalor (Lucy Punch), the city’s sixth most important financial advisor and obsessive trend-follower.  She is quickly joined by Olaf, in disguise as vaguely European auctioneer Günther, and they form a sinister partnership.  Harris described Punch’s performance as Esmé as: “almost a livewire of electricity that is just unhinged and everywhere, yet fully guarded and in control, but not.” 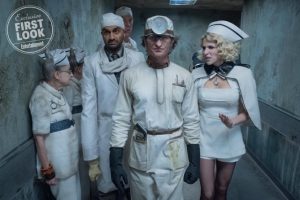 There seem to be no pictures of the Vile Village as of yet, as the released photos skip to episodes 7 and 8 which will take place in the Hostile Hospital.  Esmé and Olaf, disguised as medical staff, follow close behind the orphans as they attempt to take refuge in the Heimlic Hospital, a place Harris describes as: “A very darkened hospital with similar-looking hallways…almost like The Shining — twisted hospital nightmares.”

Harris also added on the development of his character: “Olaf is becoming more and more overtly unhinged, and the road that he is on is veering in all sorts of maddening directions.”

A Series of Unfortunate Events returns to Netflix in Spring 2018, and the third series has already been renewed by the streaming service.

Remind yourself of the first series by watching the trailer below: