‘A diamond in the rough’, Aladdin is an animated rags to riches tale of a street urchin, Aladdin, who is granted a life-changing three wishes when he finds a genie in a lamp.  In love with the unobtainable Princess Jasmine, he uses the wishes to try to impress her, but the Sultan’s advisor, Jafar, stands in the way, with his nefarious plans for both the lamp and the Princess. 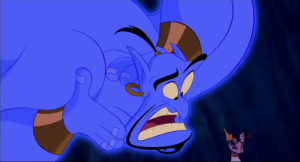 It can’t be denied that Aladdin was a success, as it was nominated for a collection of awards, especially for its soundtrack, which won both an Oscar and a Golden Globe. With a score penned by Alan Menken (The Little Mermaid, Pocahontas) and six feature songs with lyrics by Tim Rice, who also collaborated with Menken on Beauty and the Beast, it’s not hard to see why.

The film’s iconic song, ‘A Whole New World’ also won both an Oscar and a Golden Globe, while Robin Williams’ incredible voice acting as the Genie garnered him a Golden Globe Special Award for his vocal work, which was largely improvised.

Aladdin’s cast featured the collective talent of the late Robin Williams, Scott Weinger, Linda Larkin, Jonathan Freeman, and Frank Welker,  as well as the directive and writing work of Ron Clements and John Musker (the team behind The Little Mermaid, Treasure Planet and Moana to name a few). Since its release 25 years ago, there have been two successive films in the series, an animated television show, a musical, and even now work is being started for a live-action remake starring Will Smith, Naomi Scott, Billy Magnussen, Marwan Kenzari and Nasim Pedrad.

Experience a whole new world and watch the trailer below: