Acclaimed rock band Fall Out Boy have released a new single, ‘HOLD ME TIGHT OR DON’T’, from their upcoming album M A N I A, and have announced a UK arena tour for next spring.

The Chicago-born four-piece shared the video for the track early on Wednesday morning, marking the fourth release from M A N I A. 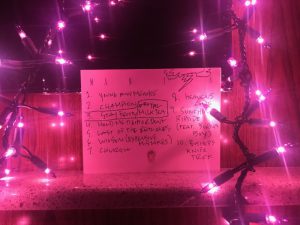 M A N I A tracklisting

Fall Out Boy will return to the UK for the next leg of the M A N I A tour, which kicked off in the U.S. last month, for four arena dates next March. The band will also be playing an intimate, one-off show at London’s Electric Brixton on January 11th to celebrate the release of the album.

M A N I A, FOB’s seventh studio album, is planned for release on January 19th, after being pushed back from September. The band began promoting the new album with its lead single ‘Young and Menace,’ released back in April.

Three other singles, ‘Champion,’ ‘The Last of the Real Ones,’ and ‘HOLD ME TIGHT OR DON’T’, have now been released.

Fall Out Boy announced the tracklisting for the new record last week.

Watch the video for ‘HOLD ME TIGHT OR DON’T’ and check out the M A N I A UK and EU tour dates below. Tickets for the UK March dates will go on general sale on November 24th. Two pre-sales will be available, one for those who have pre-ordered M A N I A (November 22nd), and another for those on the Fall Out Boy mailing list (November 23rd).