Ellen Page has been announced to lead the cast of Netflix’s The Umbrella Academy, the live-action adaptation of Gerard Way’s graphic novel series.

The comics, illustrated by Gabriel Bá, follow the members of a dysfunctional family of superheroes called the Umbrella Academy – Luther, Diego, Allison, Vanya, Klaus, and Number Five – as they attempt to work together to solve the mystery of their father’s death.

Page will be playing the role of Vanya, the ‘black sheep’ of the family and the only one of her adopted siblings to not have superpowers.

Way, the former frontman of My Chemical Romance, first released the graphic novel at the 2006 San Diego Comic-Con.  The singer is a long-time comic book fan, having studied at New York’s School of Visual Arts before the formation of My Chemical Romance. He started on The Umbrella Academy during breaks on the band’s tours. His new comic book series Young Animal was taken up by DC Comics last year.

It was announced that Netflix had picked up The Umbrella Academy back in July, for what is now known to be a 10 episode series. Way will be acting as co-executive producer for the show, along with Steve Blackman (Fargo) as executive producer and show-runner.

The Umbrella Academy is expected for release in 2018. 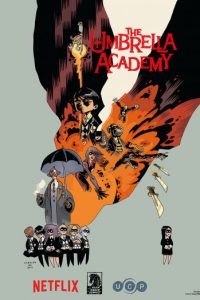