The soundtracks of the first five Harry Potter films are to be released as part of a vinyl boxset next month via Rhino Records.

“Harry Potter Original Motion Picture Soundtracks I-V” features the soundtracks of Philosopher’s Stone, Chamber of Secrets, Prisoner of Azkaban (composed by John Williams), Goblet of Fire (Patrick Doyle), and Order of the Phoenix (Nicholas Hooper) across ten LPs,  each with a pressed picture taken from its respective movie.  Order of the Phoenix also includes an etching on its last side, and three tracks from The Weird Sisters, the wizard band that takes its members from Radiohead and Pulp. 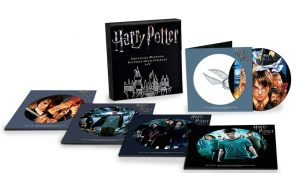