The first casting details have been revealed for the upcoming sequel of Avatar, which started filming on the 25th September.

The film will be the first of The Avatar Sequels, and is due to be released in 2020. As before, it will follow ex-marine James Sully (Sam Worthington), and daughter of the leader of the Na’vi, Neytiri (Zoe Saldana) on Pandora, but will also be introducing the next generation.  The young cast playing Sully’s family, as well as children from another clan, have been revealed to Entertainment Weekly.

The film’s executive producer, Jon Landau, said of the new youthful roles: “We never had this youthful element before, and that brings a different kind of energy to the film.  They represent the future generation of Pandora and play a very significant role — not just in this movie but throughout all the movies.”

All will be playing Na’vi, created through motion capture and CG, except one.  Jack Champion, 12 and seated with dark hair, will be playing Javier “Spider” Socorro, a boy born at the Hell’s Gate military complex.

Other confirmed cast members include Sigourney Weaver reprising her role, with The Walking Dead‘s Cliff Curtis and Game of Thrones‘ Oona Chaplin joining the world of James Cameron’s blockbuster masterpiece.

The full young cast are pictured below: 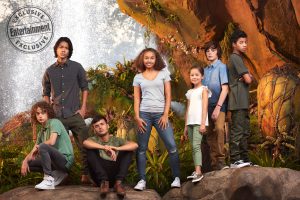