Read more
You are at:Home»News»Global News»Nostalgic News: The Princess Bride was released 30 years ago today
By Eleanor Joyce on September 25, 2017 Global News, News

On the 25th September 1987, The Princess Bride was released in cinemas, and people have been quoting from it ever since.

A cult classic, the film is endlessly sweet, funny, and light-hearted, with a host of colourful characters. The film follows Westley (Cary Elwes) a farm boy struggling to rescue his true love Princess Buttercup (Robin Wright) from the clutches of the detestable Prince Humperdinck (Chris Sarandon).  The film uniquely frames this tale as a story being read to a sick boy by his grandfather.

The Princess Bride began as a book written by William Goldman, who decided he wanted to write his young daughters a story.  After asking them what they wanted it to be about, he combined their ideas of ‘a princess’ and ‘a bride’ into a book that told the well-loved tale of Buttercup and Westley for the first time. 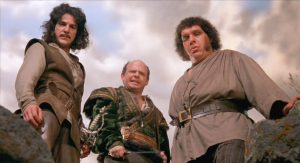 Many directors tried and failed to translate the book to film, including Robert Redford, Francois Truffaut and John Boorman, but it was ultimately Rob Reiner who took up the reins of the project successfully.  It went through several different permutations – in an early version, a relatively unknown Arnold Schwarzenegger was cast as the giant Fezzik!

The film was painstakingly researched, with the actors Cary Elwes and Mandy Patinkin taking months to learn how to fence with both their left and right hands in preparation for the duel between the Dread Pirate Roberts and Inigo Montoya.

The Princess Bride was a modest success when it was first released in cinemas, but it only became a hit with its release onto home video. It has since been included on several lists of the greatest films, including 100 Greatest Film Love Stories, 100 Funniest Movies, and 50 Greatest Comedy Films. It was also inducted into the National Film Registry as being ‘culturally, historically or aesthetically significant’.

An affectionate parody of the entire fantasy genre, the film both employs and creates stereotypes, and in so doing, becomes part of its very own genre. It hasn’t aged a bit in thirty years, with the creature models and effects becoming part of its charm rather than a limiting factor on its enduring appeal. It is a film that keeps on giving, and will undoubtedly be considered a classic for many years to come.

Watch the original trailer for The Princess Bride below: