Union Films revealed the full list of autumn term screenings through a poster on their Facebook page.

This season’s lineup includes a number of free showings, including the record-breaking Wonder Woman, Japanese hit Your Name, and sci-fi horror Life.  In anticipation of Thor: Ragnarok, Union Films are also offering the previous two instalments, Thor and Thor: The Dark World for free, as well as Kingsman: The Secret Service and Ridley Scott’s original Blade Runner, along with upcoming sequel Blade Runner 2049.

National Theatre Live screenings are also being shown for the first time, starting with Benedict Cumberbatch’s Hamlet first recorded at the Barbican, followed by Sondheim musical Follies from the Olivier Theatre.  In addition, Union Films have continued their collaboration with The Phoenix to bring the best of world cinema, including Swiss animation My Life as a Courgette.

With tickets starting from £3 , check out the full line-up below: 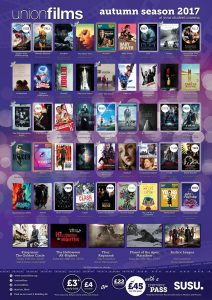