Read more
You are at:Home»News»Local News»Edge Alumni makes the shortlist for the shortFLIX Final 5
By Sophie Jones on September 20, 2017 Local News, News

Ben Robins, a previous film editor for The Edge, has been named as one of the five talented young filmmakers, chosen from out of more than 300 applications by recent film initiative shortFLIX. 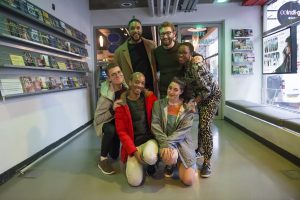 shortFLIX was launched earlier this year by Creative England in partnership with National Youth Theatre and Sky Arts.  It works within the UK, funding the talent of five aspiring filmmakers aged 18-25 and not in full-time education or employment, giving them the opportunity to create their first short film.

The initiative aims to encourage filmmakers from diverse backgrounds to tell the unheard stories of their identities and communities.

Robin’s short film, entitled: Losing It, is described as “the story of the worst drunken hook-up in the history of human sexual encounters. A twenty-something virgin finds his evening taking a turn for the weird, when his new partner shows off a rather unusual fetish.”  It is the first short directed by Robins, who has, “his heart set on really pushing the envelope with his work.”

As one of the five finalists, Robins will receive a production award of up to £10k, as well as the chance to work with experienced professionals in order to create his short film which will then be showcased on the Sky Arts channel.

Paul Ashton, head of film at Creative England, said that the scheme: “absolutely confirmed” that the UK has a wide range of “unheard voices” that are ” looking for the chance to realise what they know they have in them”.