Amid confirmation of his role in the upcoming Hellboy reboot, Daniel Dae Kim has released a statement applauding Ed Skrein for: “championing the notion that Asian characters should be played by Asian or Asian American actors.”

In August, Skrein was cast as Major Ben Daimio in Lionsgate and Millenium’s Hellboy, which will be directed by Neil Marshall and stars David Harbour in the titular role.  In Mike Mignola’s Hellboy comics, Daimio is a Japanese American military officer who has the ability to transform into a jaguar when angered or in pain.  After what Skrein described as “intense converstion and understandable upset” in a statement on Twitter, he stepped down from the role in order to allow a culturally appropriate actor to replace him.

Skrein also said in his statement: “It is clear that representing this character in a culturally accurate way holds significance for people, and that to neglect this responsibility would continue a worrying tendency to obscure ethnic minority stories and voice in the Arts. I feel it is important to honor and respect that.”

Kim was “excited to confirm” that he will be replacing Skrein as Daimio in a statement to The Hollywood Reporter released yesterday (September 13th).  He said of Skrein: “He could not have addressed the issue more elegantly and I remain indebted to him for his strength of character.”  Kim also thanked his fans,”for all the supportive tweets and comments, especially in light of the recent events surrounding its original casting.”

Along with this confirmation comes the first look at David Harbour, perhaps best known for portraying Chief Hopper in Netflix series Stranger Things, as the new Hellboy, released through the film’s official twitter account: 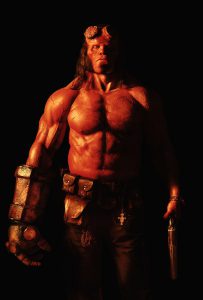 The picture was accompanied by the caption: “Holy crap. #Hellboy #FirstLook”

Hellboy is set for release on 11th January 2019 in the US, with no news yet of a UK release date.  Remind yourself of Guillermo del Toro’s original film, starring Ron Perlman, below: