The beloved children’s author became a favourite for millions of children through his stories such as Charlie and the Chocolate Factory, Matilda, and James and the Giant Peach.  Shortly after his death in 1991, his final children’s book was published with the title The Minpins, and accompanied by full colour illustrations by Patrick Benson.  It tells the story of Billy who, after disobeying his mother’s wishes, ventures beyond his garden gate into the world of the fantastical, tree-dwelling Minpins, whose children are the size of matchboxes, and who live in fear of the fire-breathing Gruncher.

The Minpins had been Dahl’s only children’s book without illustrations by Sir Quentin Blake, so as part of the annual birthday celebration for the late author held between 8-13 September, Blake was asked to supply nearly 50 pages of black and white illustrations for the new edition, which had also been given a new title, Billy and the Minpins. 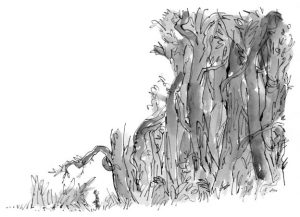 Blake has said that he: ” was delighted to be asked to illustrate Roald’s Billy and the Minpins; it feels like the cornerstone in our long collaboration together.  As Roald’s parting gift, Patrick Benson’s illustrations in the original edition were perfectly suited to the lyrical feel of The Minpins. I have always greatly admired Patrick’s artwork and am so pleased both books will sit alongside each other, reaching fans of all ages.”

The updated title also hopes to bring what remains one of Dahl’s lesser known tales to a wider audience.

“The new title is drawn from the title Roald gave to an early draft of the story.” said Luke Kelly, Managing Director of the Roald Dahl Literary Estate and Roald Dahl’s grandson.   “We think it’s perfect as Billy is a quintessential Roald Dahl hero and deserves to be seen in the same light as Charlie, Matilda, James, Sophie and all the other child heroes readers around the world know and love.” 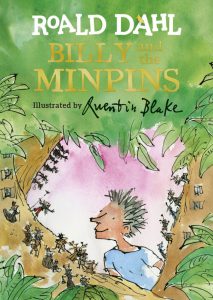