The full major cast for Disney’s 2019 live-action remake of Dumbo was revealed at the D23 Expo this Saturday, as well as an official plot synopsis and the first image of the remake of the classic.

Tim Burton, who will be directing the film, announced the cast, including Colin Farrell, Danny DeVito, Michael Keaton, and Eva Green, during a short video.  The film will also feature young newcomers Finely Hobbins and Nico Parker.

The announcement was shortly followed by Disney’s first official synopsis:

“Disney’s new live-action feature film “Dumbo” introduces Holt Farrier (Farrell), a former circus star who finds his life turned upside down when he returns from the war. Circus owner Max Medici (DeVito) enlists Holt to care for a newborn elephant whose oversized ears make him a laughingstock in an 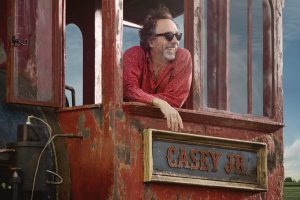 Roshan Seth, DeObia Oparei, Sharon Rooney and Douglas Reith are also set to join the cast, but their roles are as yet unknown.

Production of the film is currently taking place at Pinewood Studios and Cardington Studios, which is set to be released in March 2019. Check out the announcement video below: