Michael Bond, the creator of the legendary British icon Paddington Bear has passed away.

The author, who was best known for the creation of the marmalade loving bear from ‘deepest, darkest Peru’ died at home on Tuesday after a short illness, his publisher Harper Collins has said.

Bond had also created characters such as Olga da Polga, A Mouse Called Thursday, and a series of novels for adults following a French detective named Monsieur Pamplemousse.

He began his career at the BBC, becoming a cameraman for the children’s television show Blue Peter. 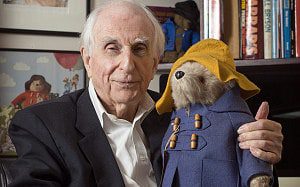 Photograph by Geoff Pugh for The Telegraph

He started writing while stationed in Cairo in 1945 while serving with the RAF and army during World War II.

Many have turned to Twitter to express their sorrow at his loss, including Stephen Fry, David Walliams, broadcaster Jeremy Clarkson, and Hugh Bonneville, who will be reprising his role as Mr Brown in this year’s Paddington 2.

“In Paddington, Michael created a character whose enthusiasm and optimism has given pleasure to millions across the generations,” he said. “Michael will be greatly missed by his legions of fans and especially by his wife Sue, his family and of course by his beloved guinea pigs.”

“He will be forever remembered for his creation of the iconic Paddington, with his duffle coat and wellington boots, which touched my own heart as a child and will live on in the hearts of future generations. My thoughts and love are with his wife, Sue, and his children Karen and Anthony.”

Thomas Michael Bond was 91. He is also survived by his four grandchildren.