Filming is officially underway for Deadpool 2.

As fans, may know the road to production on the sequel has been somewhat fraught, though not nearly as much so as for Deadpool.  20th Century Fox really didn’t want to make the R-rated superhero movie and it was only after years of stops and starts that star/producer, Ryan Reynolds; director, Tim Miller, and writers, Rhett Reese and Paul Wernick, got it greenlighted but with a fraction of the budget that other superhero movies get.

Deadpool was a huge success, grossing $783 million at the box office prompting work on the sequel to begin quickly. 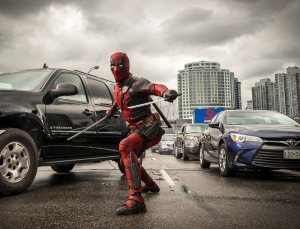 The sequel was hit by more difficulties when, due to creative differences, Miller dropped out during prep.  Reynolds, Reese, and Wernick continued to develop the script whilst quickly enlisting David Leitch (John Wick (co-director) and Atomic Blonde) to direct, and Drew Goddard (The Cabin in the Woods) to consult.

Eventually the team could start the casting process.  The search for Cable, a major character from the comics, included high profile names like Brad Pitt, before Josh Brolin (W., Milk, and No Country for Old Men) was eventually cast. Zazie Beets (Atlanta) won the part of Domino.

Reynolds took to Instagram to share a snap of the first day’s slate, which confirms that Jonathan Sela (Atomic Blonde and Transformers:  The Last Knight) is going to be the cinematographer.  The first set photos have also arrived, which show Deadpool crashing a child’s birthday party.

Deadpool 2 will be in cinemas from June 1st 2018.  Take a look at the set photos below.

The sun sets on day 1. Feels good to be back. This dog can hunt.