Almost a month after an apparent leak teased the game’s setting, Activision on Wednesday finally confirmed that this year’s entry in the Call of Duty franchise would take the massive first-person-shooter series back to its roots in Call of Duty: WWII.

It’s a dramatic shift for the franchise, which last showcased a World War II setting in 2008’s acclaimed Call of Duty: World at War, with many of the more recent entries exploring the near- or far-future.

It’s this point that Glen Schofield and Michael Condrey, studio heads of Call of Duty: WWII developer Sledgehammer Games, were keen address, as they repeatedly focused on the upcoming game’s focus on visceral, “boots on the ground” gameplay – and shift away from superhuman-like player characters – in Wednesday’s live-streamed reveal event.

In addition to dropping the reveal trailer for the game and confirming a private beta of its multiplayer (first on PS4), Wednesday’s event divulged many details about Call of Duty: WWII‘s single player campaign. Sledgehammer’s upcoming game ditches the globe-hopping of many of the franchise’s predecessors – there won’t be any levels showcasing the Pacific, North Africa, or Russia – and instead focuses on the gritty, human tale of one band of soldiers as they advance through France towards the German Reich, starting with D-Day in 1944. As the developers put it, they “didn’t want a greatest hits of World War II,” but rather wanted to tell an intimate yet horrific war story that still delivered on the terrors of World War II’s greatest battles, such as The Battle of the Bulge and the aforementioned D-Day landings. 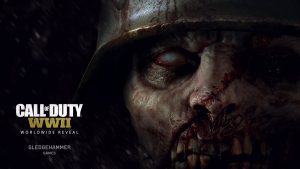 In addition, Sledgehammer teased that the fan-favourite co-operative zombies mode would make an appearance, with Activision saying in a press release that this year’s take on the mode “delivers a unique storyline that’s an all-new take on Nazi Zombies.” The mode has been a staple since Sledgehammer’s last game, 2014’s Advanced Warfare, although it was first introduced by Treyarch in World at War.

Finally, some multiplayer features were also detailed, such as the announcement of a ‘Headquarters’ lobby – a non-combat social space similar to Destiny‘s Tower. There, players can meet other people, chat to friends, and level up their online character in unique ways, with Sledgehammer promising “interaction, recognition and awards unlike anything experienced in the franchise to date.” The team also revealed a new ‘War Mode’ that will let players take part in famous historic World War II battles, with different objectives for each team depending on whether you’re the Allies or the Axis, whilst character classes have been dropped to make way for ‘Divisions’. What this all means for the series’ massively popular online multiplayer, we’ll have to wait until E3 in June to find out.

Call of Duty: WWII will launch on 3rd November 2017 for Xbox One, PS4 and PC. Watch the reveal trailer below: