Popular alternative-rock foursome Don Broco have today been announced as the main headline act for Garden Court for the 2017 Graduation Ball on Saturday 10th June. 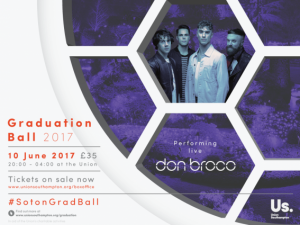 The band are most famous for their single ‘You Wanna Know’ released in 2013, which peaked at number 39 in the UK chart. Don Broco are also regular members of the festival circuit, having performed at both Download and Sonisphere festivals and have also supported other rock act tours including Bring Me The Horizon and Enter Shikari. They signed up to SharpTone records last year.

This announcement comes several weeks after the first act, K.O Kane and Tom Zanetti were announced as both being set to perform D.J. sets in The Cube at the event.  Keep an eye on the official Facebook page and the official Graduation Ball website for further details regarding the rest of the event lineup.

Graduation Ball 2017 is at the University of Southampton Highfield Campus and Student Union Complex on Saturday 10th June. Tickets can be bought here for £35.00 up till 1st June, and then for £40 afterwards.

Remind yourself of Don Broco’s ‘You Wanna Know’ below: