Cult comedy Hot Fuzz, the so-called second installment in the Cornetto Trilogy was released 10 years ago today, on 20th April, 2007.

The satiric buddy cop film,  sees star London police officer, Nicolas Angel (Simon Pegg), forcibly transferred to picturesque suburban town, Sandford that has a non-existent crime rate and multiple ‘Village of the Year’ awards to its name. Angel is paired with the dim-witted cop, Danny Butterman (Nick Frost) as he comes to realise that there is more to this idyllic town that it seems and that there might be a darker reason for the sky-high accident rate. 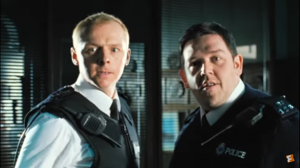 This film is yet another marvellous pairing of the Nick Frost and Simon Pegg comedy duo that features many moments of hilarity as they take on every buddy-cop/action trope ever in this parody that doesn’t quit. It also features an impressive supporting cast with the likes of Martin Freeman, Bill Nighy, Olivia Colman, Alan Partridge, Bill Bailey, and Stephan Merchant all appearing in this police parody.

Check out the hilarious trailer for Hot Fuzz below: