The official full track-list for the soundtrack for Guardians of the Galaxy Vol. 2– aptly named Awesome Mix Vol. II– has been revealed today via the official Marvel Cinematic Universe Twitter account. 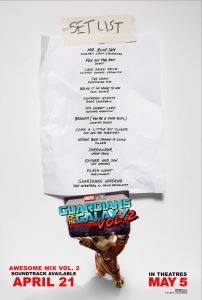 The soundtrack, which contains fourteen songs includes classics like ‘Mr Blue Sky’ by The Electric Light Orchestra and ‘The Chain’ by Fleetwood Mac which has already debuted in several trailers for the film. The full soundtrack can be seen on the poster to the right.

Guardians of the Galaxy‘s Awesome Mix Vol. I, which contained the official soundtrack for the first film included hits such as ‘Spirit in the Sky’ by Norman Greenbaum, ‘Moonage Daydream’ by David Bowie and ‘Ain’t No Mountain Higher’ by Marvin Gaye and Tammi Terrell. It received widespread critical acclaim, spending eleven weeks top of the U.S. Billboard 200 chart and selling over 425,000 copies, certifying Platinum.